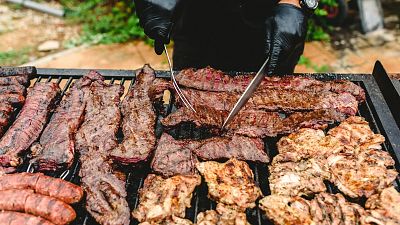 A new campaign calling for people to become ‘beefatarians’ has been backed by the European Commission.

It is part of a three-year project that seeks to dispel false beliefs around the consumption of meat and is being led by the Inter-professional Organisation of the Spanish Beef Industry, Provacuno, plus Belgian meat organisation APAQ-W.

‘Become a beefatarian’ was launched back in October, with nearly €3.6m of EU support being pumped into the campaign in order to strengthen the sector.

It’s all part of a wider project by the commission, called Proud of European Beef. This is aimed at inciting consumers to do away with red meat stereotypes and to “enable them to be again confident about their consumption decision.”

The EU is a major producer of beef and veal, with a total herd of around 78 million cattle.

A beefatarian is supposedly someone who wants to “have a balanced diet”, Provacuno director Javier Lopez told Food Navigator. He cited proteins, vitamins and minerals as essential nutrients we can gain from eating it regularly

In the campaign promo video, beefatarians are defined as those who “don’t hesitate to order a side of Ribeye with their asparagus.”

But alongside advocating for the health benefits of red meat, Provacuno also focuses on the environmental advantages, making the argument that buying locally sourced produce is more sustainable.

In his interview with Food Navigator, Lopez went on to say that the beef sector was good for nature. He describes the production as zero waste, says pastures act as great carbon sinks, soil is able to be fertilised and fires are prevented.

What do environmentalists have to say?

Red meat has been linked to the destruction of the environment in several different ways.

The industrial meat system requires a huge amount of land to sustain itself, which in turn causes land clearing and deforestation. But even with land aside, Greenpeace lays out seven reasons as to why eating meat is so bad for the planet. It is a direct cause of climate change, is responsible for human rights abuse and land-grabbing and kills wildlife in the process.

We spoke to Juliet Gellatley, founder of British veganism charity Viva!, to find out her take on becoming a beefatarian.

“This campaign is utterly delusional,” she begins. “It has been proven time and time again that red meat, such as beef, is linked to heart disease, diabetes, and cancer, due to its high level of saturated fats, cholesterol, and salt. The scientific evidence against red meat is backed by government bodies and leading agencies, such as the World Health Organisation.”

Gellatley also condemns the messaging of the campaign from an environmental point of view, calling it “laughable”.

“Animal farming is at the heart of the climate crisis,” she says. “Beef farming in particular is causing mass deforestation as land is cleared for grazing and to grow animal feed, which in turn contributes to desertification.”

The founder concludes by stating that she is disappointed in the European Commission for backing the campaign and says it is “high time” we paid attention to the latest scientific evidence and encouraged the public to go vegan.