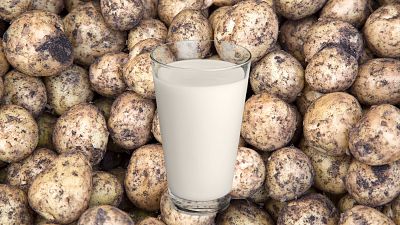 There’s no escaping plant-based milk in the 21st century. Visit any major supermarket in Europe and you’re likely to find more than three types on the shelf.

In the UK, nearly a quarter of British people now consume plant-based milk, with that figure rising to 33 per cent among 18 to 24 year olds.

Entering into this popular and saturated market is new plant-based milk, claiming to be the most sustainable dairy alternative yet: potato milk.

Suitable for vegans and nut-free, Swedish company DUG has just won a 2021 World Food Innovations Award in the Best Allergy Friendly Product Category for its creation. The dairy alternative has just gone on sale at UK supermarket Waitrose with the retailer predicting that it will be one of 2022's best sellers.

So where does potato milk sit in comparison to other plant-based milks, and with such strong competition, can it have an impact on the market?

A brief history of plant-based milk

Sustainability and the quest for a low carbon footprint have been at the heart of the plant-based milk boom since the beginning. While the carbon footprint of dairy milk varies from country to country, the global average is a whopping 3.0kg CO2 per litre produced.

When compared to oat milk’s average of 0.9kg CO2 per litre, it becomes clear there are huge carbon savings to be made. These facts, coupled with an increasing awareness of climate issues, are what makes the plant-based milk market so lucrative.

Not all milk is created equal though, and shaky green credentials have seen some plant-based options fall out of favour in the last decade. While almond milk, for example, has a low carbon footprint during production, an average of just 0.7kg CO2 per litre, it is environmentally disastrous in other ways.

Around 80 per cent of Almond milk is grown and produced in California, an American state well-known for its droughts. This makes almond milk’s high water production values - 120 litres to produce just one glass - terrible for the local environment.

Though this is still less water than it takes to produce one glass of dairy milk, the carbon footprint of shipping it across the world makes almond milk one of the worst culprits.

Soy production has led to vast areas of the Amazon rainforest being cleared. Taking the green crown at the moment, is oat milk.

Equally, soy milk has had a very rocky relationship with environmentalists. With a low CO2 per kg and low water use, on paper soy is very sustainable.

But due to its use for feeding dairy and livestock, soy production has led to vast areas of the Amazon rainforest being cleared, destroying vital ecosystems in the process.

Taking the green crown at the moment is oat milk. Widely regarded as the most sustainable milk to date, oat milk uses slightly more CO2 per kg than almonds, but uses less land and significantly less water, making it, until now, the winner across the board.

The new (potato) milk on the block

Created by academic, Professor Eva Tornberg, at Lund University, DUG is the name of the latest plant-based milk to challenge oat milk’s crown. Produced in Sweden it is now available to buy online and at supermarkets in the UK.

Like most plant-based milk, it is created from an emulsion of the plant-based product - in this case, potatoes - and rapeseed oil. Available in Original, Barista and Unsweetened editions, potato milk is appealing to a young, coffee-fuelled crowd, much like oat milk brands Oatly and Minor Figures before it.

But what are the environmental credentials of potatoes? Well according to DUG, they’re excellent. The company’s website states that growing potatoes is twice as efficient as growing oats per square metre, and that potato milk has a lower carbon footprint than any other plant-based milk, clocking in at a tiny 0.27kg CO2 per litre.

"Potatoes can be cultivated almost anywhere in the world, and with a low carbon footprint, the milk requires just half as much land as oat milk and 56 times less than almond milk for production," says Manahai.

While potatoes aren't generally thought of as a ‘healthy’ vegetable, mainly due to the range of unhealthy ways that we consume them - chips, mash and roast potatoes being prime suspects - according to DUG they are packed full of antioxidants and vitamins.

If DUG wants to break into the already over-saturated milk market though, there’s one key thing they need on their side: taste.

So does potato milk have a flavour? To date, there's been a fairly positive reception on Amazon, though several reviewers have commented that the milk splits in tea.

This is something they’ll need to deal with if they want to reach a mass audience.

How much further can milk innovation go?

Sales of plant-based food have increased by a huge 49 per cent in Europe in the past two years alone according to this EU-funded research, so it’s no wonder that new companies are trying to enter the market.

Have we reached peak plant-based milk - or will we be drinking something even stranger in 2022?