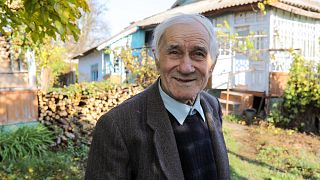 Bones. That was all Ion Sandu found when he returned to visit his lifelong home after being away for half a year. When he and his late wife were evacuated by the military, they’d had to leave behind their rabbits and a family of ducks.

“They all died," Ion remembers, with wet eyes.

In July 2010, a catastrophic flood forced Ion and his neighbours to flee their houses in Cotul Morii, taking only the essentials. The water completely submerged the village, a rural community established 200 years ago on the banks of the River Prut.

When he returned, the house looked very different. An animal graveyard. A swamp. The only life around: a white cuckoo drinking amid the destruction.

That day, Ion decided he would stay, even though his village no longer existed.

The day the dam burst

Above her knees, almost up to her waist. Galina Bunescu, a 71-year-old resident of Cotul Morii, demonstrates how far the water levels rose. The River Prut had overflowed many times when she was young, but the water had never risen above her ankles.

The 2010 floods were devastating to communities in Romania, Czech Republic, Slovakia, and Bosnia and Herzegovina. In Moldova, rainfall between May and July was almost double the average for this period. Torrential rain in western Ukraine also added to the large accumulation of water in the River Prut.

In Cotul Morii, people began to panic when they heard the flood-control dam in the neighbouring village had broken.

Aliona Bunescu remembers every detail of the day that changed her life: “It was beautiful. It was hot. That year was a rich harvest.” Her daughter was then four years old and her son was just one. It was in the evening that a neighbour told her the dam had broken and that the water was coming very fast.

“We have to evacuate,” he warned. “Take only what you need.”

"At first people didn't believe it, and neither did I," Aliona remembers.

The older people in the area recalled a time when the River Prut had “come to town” but back then, the villagers had stayed put. In 2010, all the residents of Cotul Morii were evacuated by the army.

How do you sleep when you hear the village's warning siren?

Ion and his wife Raia had prepared to spend the night in their attic, but they couldn’t get to sleep. “How do you sleep when you hear the village's warning siren?,” he asks. They could also hear the water coming. Someone knocked at their door – the mayor of the village.

“Is this Ivan Trofimovici?” he asked, shining a torch in Ion's face and referring to him by his Soviet-era name.

“In the truck, Ivan Trofimovici, in the truck,” the mayor ordered. That night Ion and Raia slept on the floor of a school in a neighbouring village.

When Aliona and her husband woke up the morning after the flood, they drove uphill and looked down at their village.

"Where we were born, where we had children, where we worked… it was all just water, we couldn't believe it," she says.

According to the study The Human Cost of Weather-Related Disasters 1995-2015, Moldova features in the top ten countries worldwide with the highest proportion of people affected by climate disasters.

“When are we going home?,” Aliona’s children asked for months after the floods. The family was staying with relatives in Chisinau, the country’s capital. For Aliona and her children, “home” had always been the house in Cotul Morii, the one Aliona’s husband had inherited from his grandparents, the one they had spent years remodeling.

But they would never be going home. Cotul Morii was no longer a village. That was the decision the Moldovan government made after the floods. A new Cotul Morii would be built 15 kilometres away, outside the high-risk flood zone. The village would have the same name and families would receive a house with two or three rooms.

Aliona recalls being disgusted the first time she saw the orderly succession of red roofs and white walls. “The houses looked like mushrooms that grow after rain.”

There were 440 families in the original village, about 60 of which decided to remain there.

“The elderly, especially, suffered a lot,” says Cotul Morii's former mayor Lucia Guștiuc. They were asked to leave everything they had ever worked for and start all over again in a new place, she explains.

Over the last decade, those who remained in the old village, which no longer officially exists, have become accustomed to living without infrastructure, drinking water, schools, day care centres, town halls or medical facilities.

From floods to drought: a country vulnerable to climate change

Every year, floods impact an average of 70,000 people in Moldova and cost €90 million. For the poorest country in Europe, this equates to almost 1 per cent of the country’s GDP.

The populations worst affected are those along the Prut and Dniester rivers, which run west and east of Moldova, respectively, as natural borders with Romania and Ukraine.

A key element of climate change is the impact on Earth’s water cycle. As temperatures rise, evaporation rates increase, putting more water in the atmosphere. This means more rain falling, over a shorter time.

Warmer temperatures also lead to drier soil, causing heavy rainfall to run off into rivers, rather than being absorbed into the ground. All of this leads, paradoxically, to both an increased likelihood of flooding and an increased chance of drought.

The World Health Organisation warns that the expected increase in extreme weather events will lead to more frequent floods in Europe. But no European population is as vulnerable to climate change as that of Moldova.

Although the threat of flooding is ever present, ironically what worries the people of old Cotul Morii is a lack of water. In Moldova, 60 per cent of the population doesn’t have access to safe drinking water and droughts are becoming more and more frequent.

According to the UN, the country suffered eleven droughts between 1990 and 2015, which had a significant impact on harvests. In 2012, the resulting losses amounted to €1 billion.

The right to stay put: living in a ghost town

"How do you leave such a beautiful house?" asks Ion.

He says he wants to die in old Cotul Morrii, in the house built of solid acacia wood, the wood that resisted the flood, in which he was born, raised and later married.

When he returned to the house, he had to use an axe to open the doors, the wood had absorbed so much water. “I repaired the floor and here is where I have lived so far,” he says proudly. He lives alone now, after his wife Raia died some years ago.

Ion rents out the house he received in the new village for 200 lei per month (around €10), giving him a small regular income.

Galina Bunescu made a compromise. She spends the summers in the old village and the winters in the new one, where her house is warmer. But to her, home – or her "nest" as she calls it – is still the original Cotul Morii.

“[Being uprooted] is very hard in all forms of migration, but even more so in this case where the whole village has to leave,” explains Beatriz Felipe, a Spanish climate migration researcher.

Felipe says there are many sensitive and complex questions when it comes to relocating an entire population, such as whether to involve the inhabitants in the design of their new village or to maintain the structure of the original one.

“Within the planning of the relocation, the rights of the people who don't want to leave have to be taken into account,” she adds, referring to the often-overlooked issue of the right of voluntary immobility.

Those who remained in old Cotul Morii have done so at their own risk. If they face another disaster, authorities will not be there to help.

An agricultural economy particularly at risk

Half of the population in Moldova lives in rural areas such as Cotul Morii and around one in three Moldovans owns farmland. This dates back to the Soviet period when agricultural land was split into sovhozes, state-owned farms, and kolkhozes, collectively owned farms. After Moldova became an independent country in 1991, this land was divided into equal parts and assigned to citizens.

The fact that agriculture, and particularly rain-fed production, is such an important sector for the country is what puts it at high risk in the face of climate change, explains Vasile Scorpan, manager of Moldova’s government climate change office. “We need systems to protect agriculture from extreme climate phenomena, such as hail, torrential rains and floods,” he adds.

Asked about his policies on adapting to climate change, Moldovan President Igor Dodon told Euronews: “The issue is not that of one country or nation, but a global one.” Dodon claims to have several plans to mitigate the effect on his country, but did not say anything more specific.

Climate as a motivation behind migration

About 100 Moldovans leave the country every day looking for a better paid job abroad, especially those of its younger population.

President Dodon told Euronews that this brain drain is the country’s biggest threat. “In fact, in 28 years of independence [from the Soviet Union], we’ve lost one third of the population”.

However, finding statistics which show whether this movement is linked to weather conditions is “very problematic,” says Vasile Scorpan, although he says that he is certain the climate has had some influence on emigration.

After the flood, Aliona's husband decided to go to the UK to work. The family invests the money he sends her in improving their house in the new Cotul Morii village. She does not believe his emigration was related to the climate, but rather to poverty – in 2019, Moldova’s average monthly salary was 6975 lei (€360).

But the elders in old Cotul Morii have no doubt that the climate has already had an impact on their lives.

Galina worries about the lack of rain. “When I was younger, it rained at the right time, but now the rains are rare.”

In 2017, Ion wrote a poem he called Winter in April, after waking up to snow in springtime for the first time in his life. Its last line reads: “Maybe the climate has changed. Or maybe the world is broken.”

This article was part of a series originally published in March 2020.