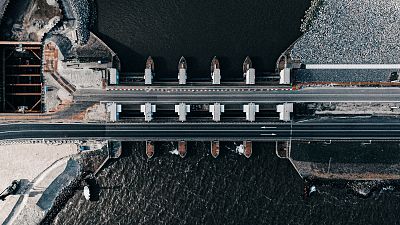 After several devastating floods in the early 20th Century, the Dutch government decided to build a massive artificial dam in the North Sea to protect the country from future floods.

In the following decades, however, numerous negative effects on the marine ecosystem have become apparent - particularly for migratory fish and vital seagrass meadows.

Now, new projects from environmental organisations in the Netherlands are aiming to restore balance to this ecosystem.

Protection against flooding and storm surges

A large part of the Netherlands is below sea level, meaning floods and storm surges have always posed a major risk to the country. After a particularly devastating flood in 1916, the Dutch government decided to build an artificial dam between the Zuider Zee and the North Sea. In 1932, the so-called Afsluitdijk, or ‘Enclosure Dam’, was completed stretching 32km across the mouth of the bay.

This dam connects the Dutch provinces of Noord-Holland and Friesland, with the A7 highway running along the top of the Afsluitdijk. This artificial barrier turned the former saltwater Zuider Zee, into which several rivers flow, into today's freshwater Ijsselmeer, the largest lake in the Netherlands. With the help of sluices in the Afsluitdijk, this freshwater drains through the dam and into the North Sea.

How is the dam an obstacle for migrating fish?

Various migratory fish commute between the salty Wadden Sea and the sweet Ijsselmeer to spawn in fresh water and to raise their young. The dam has created a barrier that experts believe is preventing them from carrying out their natural life cycle.

"It cut the migration routes of about a hundred fish species that commute between fresh and saltwater which is now impossible."

Millions of fish are waiting in the Wadden Sea in front of these gates.

Since the Afsluitdijk blocks these migration routes, as noted by Rijkswaterstaat, (the Dutch Ministry of Infrastructure and Environment) sluices were installed in the dam to allow the fish to pass. However, it became apparent that their current was too strong for many species of fish and that only the strongest swimmers were able to pass.

"Millions of fish are waiting in the Wadden Sea in front of these gates. They can smell the sweet water on the other side and want to swim there, but the current is too strong and the transition between salt and fresh water too abrupt," say the experts at De Waddenvereniging.

The result of this has been a decline in populations of many species of migratory fish - even in bodies of water that flow from outside of the Netherlands such as the Rhine. In 2018, De Waddenverenging recorded a dramatic 90 per cent decline in the size of fish stocks in the Wadden Sea when compared to 1959.

The Afsluitdijk has also affected the flora of the Wadden Sea, specifically the seagrass. Dr Laura Govers, ecologist, biologist and lecturer at the University of Groningen, has been studying this special plant since 2007.

"It is important for biodiversity. Like mangrove forests and coral reefs, it forms an ecosystem. It also provides a safe place for young fish to grow up, it sequesters carbon, and can filter toxic substances from the water."

"However, seagrass has almost completely disappeared in the Netherlands," Govers adds. That's why, since 2014, she has been working on a project to bring the marine plant back to the Dutch Wadden Sea.

Restoring the seagrass meadows by hand

For this purpose, Govers regularly travels to the Wadden Sea with her team and numerous volunteers to plant seeds. Scientists have developed a special method to prevent them from being washed away by the strong currents.

"For the past three years, we have been working with seeds from Germany, where seagrass still exists,” she explains.

“We collect the seeds in the fall, store them in artificial seawater that we produce ourselves during the winter, and then mix them with Dutch seabed in our laboratories in the spring. We put this mix into spray guns and plant the seeds in the seabed in the Wadden Sea."

"But to create a healthy ecosystem in the Wadden Sea, we certainly need another ten years."

What is an artificial river and how could it help?

To support marine life, another new project is being implemented. A fish migration river, an artificial, four-kilometre-long, meandering waterway, should also enable weaker fish that cannot swim against the current to pass from fresh to saltwater and back. Construction began in January 2021 and is scheduled for completion in 2024.

Species that will benefit include salmon, sea trout, and herring. In the course of the artificial river, which is to be built near the Frisian village of Kornwerderzand, the saltwater mixes with fresh water to make the transition easier for the fish.

Other fish species that do not normally migrate will also benefit from the new artificial river, the Wadden Sea experts say.

"Such a transition from fresh to saltwater is by nature an enormously nutrient-rich area," says Wouter van der Heij of De Waddenvereniging. The environmental organisation is responsible for the project in cooperation with the nature organizations It Fryske Gea, Het Blauwe Hart, and an association of sport fishermen.

"Not only can fish stocks be regenerated in this way, but animals that eat fish, such as seals and seabirds, also benefit. With stronger fish stocks, we also improve the situation of professional and recreational fishermen."

"With this project, the Netherlands is opening the front door for Europe's fish migration," De Waddenvereniging says.