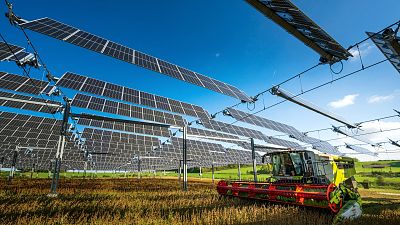 Agrivoltaics - the practice of using land for both solar energy and agriculture - is on the rise across France.

In the Haute-Saône region, in the northeastern part of the country, an experiment is being conducted by solar-energy company TSE.  It is hoping to find out whether solar energy can be generated without hindering large-scale cereal crops.

Previous attempts to experiment with agrivoltaics have been through smaller-scale projects. But, keen to see if it can thrive on an industrial level, 5,500 solar panels are being spread over this farm in the commune town of Amance by TSE.

If successful, the crossover could be revolutionary for both the agricultural and solar panel industries.

How do solar panels help protect crops from climate change?

"The aim was to be able to meet France's needs in terms of renewable energy development, without pre-empting agricultural land," says Xavier Guillot, head of agronomy research and development at TSE.

"[This would] allow the continued development of agronomic and agricultural activities, in this case, in field crops as well as in livestock."

Guillot explains that the aim is to allow farmers to keep producing food while providing shade to protect crops from climate change - like the droughts and very hot weather seen this summer.

How much energy could these solar panels produce?

TSE is one of the main producers of solar energy in France. It says that the solar panels in its experiment produce 2.5 megawatts at peak times - equivalent to the energy consumed by 1,350 people. It is scheduled to be connected to the power grid in early December.

Able to follow the path of the sun, the solar panels can also shift vertically to let the rain pass. Horizontally, they can limit the damage of hail or make the ground rise or cool a few degrees celsius depending on the weather.

Watch the video above to see the solar panels in action.

Why has the UK imposed a ‘de facto windfall tax’ on renewable energy?