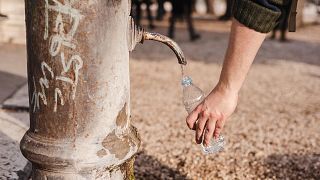 PFAS or ‘forever chemicals’ have been discovered globally in rainwater, breast milk, wild animals and countless rivers and water sources.

Concerns around this widespread and dangerous pollution are growing. Chemicals in this extremely persistent group of around 12,000 different substances don’t break down naturally and some forms of PFAS can take over 1,000 years to degrade.

Last week a group of around 45 NGOs published a manifesto calling for EU member states and the Commission to completely ban all of these forever chemicals.

“There is clear and unequivocal evidence that demonstrates global contamination of the environment, wildlife and human populations by PFAS,” wrote organisations including Client Earth and Greenpeace. They added that these are the most persistent human-made chemicals known to date.

“There are 1,000s of different PFAS. However, it is of great concern that only a handful are currently controlled by regulations at the global level even though many safer alternatives are readily available.”

They are asking for PFAS to be banned in consumer products by 2025 and for a complete ban by 2030.

So just how widespread is the forever chemical problem in Europe? Here are just a few examples of PFAS pollution.

Around Lyon, in the heart of the Rhône valley, there are around 500 chemical companies. In May, an investigation by Envoyé Spécial revealed extensive PFAS pollution in the region’s air, soil and water. These man-made substances were even found in the breast milk of 13 volunteer mothers.

PFAS could affect the drinking water of over 200,000 people on the outskirts of Lyon where levels of these forever chemicals are reportedly above the EU regulatory threshold.

With the Rhône valley already in the spotlight, a new study carried out by the Regional Directorate for the Environment Planning and Housing (DREAL) and the Rhône Fishing Federation found that all species of fish in the river were contaminated with forever chemicals. Perch was the species that accumulated the most PFAS followed by catfish.

Included in the manifesto’s case studies is the Veneto region of Italy. Here up to 350,000 people may have been exposed to drinking water contaminated with forever chemicals for decades. The chemicals reportedly came from the Miteni factory, which had been operating since 1964 and closed in 2018.

Blood tests from residents in the region revealed levels of PFAS that exceeded national recommendations. Carbon filters have been installed at drinking water treatment plants since the discovery of the contamination; these currently cost around €1 million a year to maintain.

In June, US multinational company 3M agreed to pay €571 million to the regional government of Flanders, Belgium after a chemical leak.

This out-of-court settlement came after the chemical giant repeatedly denied that PFAS had been leaking into the groundwater at its plant in Zwijndrecht near Antwerp. 3M promised “significant actions to reduce PFAS discharges and emissions”.

It came after a 2021 study from Flemish health authorities showed worrying signs of exposure to forever chemicals. It found that 59 per cent of adults and adolescents living within three kilometres of the plant had concentrated levels of one kind of PFAS - perfluorooctane sulfonic acid (PFOS) - in their blood.