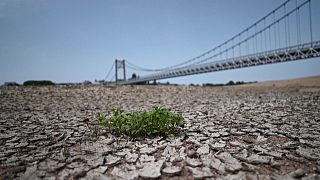 From Ireland to Croatia, and from the Arctic to the Mediterranean sea, Europe saw examples of extreme weather in 2022 and experts are warning this could be the new normal.

“And then a climate where you can see, for example, in the south-west of France wildfires that were incredibly difficult to contain such as had been seen before in Portugal," she said. “So, for me, that was no surprise, but at the same time so sad to see, and also frankly the fact that the knowledge was available to show that this type of event is going to become more intense but that our societies are not ready for them.”

She added: “The Summer of 2022, for me, truly saw the materialisation of a new climate.”

And, perhaps not surprisingly, 2022 was the warmest year on record for many European countries.

Glaciologists are concerned with the impact these changes are having on Europe’s traditionally colder areas. They say the 2021-22 winter season was very dry especially on the southern side of the Alps, with almost no precipitation between December and March, leaving glaciers exposed to the warmer elements in the spring and summer.

“Low snowfall means that we had a very thin snow cover on the glaciers at the end of winter,” said Dr Matthius Huss, Climatologist, ETH, Zurich. “And this is, of course, a very bad start going into the melting season.”

Dr Huss says the Swiss Alps lost 6% of their total remaining ice volume as a result.

“We had a combination of very little snow during winter time and then very high temperatures during the summertime, so continuous heat waves. This combination is the worst thing that can happen to glaciers, and this resulted in absolute record ice losses that we have never seen before.”

Halfway across the Atlantic, the highest point of Greenland saw rain rather than snowfall for the second consecutive year.

It shows that in December 2022 Europe was 0.9 degrees Celsius above the 1991-2020 average. But there were significant differences between the north and south of the continent.

The British Isles and Iceland had cold conditions with Rekjavijk recording its lowest temperature since 1918.

But it was a different story around the Mediterranean where the month was exceptionally warm. For the countries shaded in red, 2022 was the warmest year on record.

The changes in weather conditions are also having a devastating impact on the health of some of Europe’s more vulnerable citizens.

It has now been calculated that there were over 20,000 excess deaths last summer in Europe as a result of the unusually high temperatures with victims affected in countries such as Spain and France that have had experience of these factors, but also in the UK where excess deaths related to heat hit an all time high last summer.