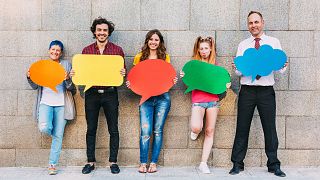 Different languages have different ways of describing the problems of the climate crisis.   -   Copyright  canva
By Charlotte Elton  •  Updated: 19/12/2022

Our collective climate vocabulary has grown rapidly over the past few years.

But these are all English phrases - and climate change is a global issue.

Different languages have different ways of describing the problems of the warming crisis, from eco-anxiety to extreme weather. Many of these have no direct English-language equivalent.

Words will always reflect their cultural and social contexts, says Maren Pauli, Head of B2B Didactics at Babbel. But they reflect shared meaning, too.

"As well as points of difference, there are certain words and concepts that many languages share, signalling shared experiences," she says.

"In particular, the prevalence of these new words shows that climate change is a hot topic around the world, and the various terms connected with climate anxiety demonstrate that many people are experiencing concern and worry, which is being reflected in their languages.”

Here are six of the most important European climate phrases should know.

It refers to an eco-friendly lifestyle and policy choice, explains Pauline Bureau, a PhD candidate in applied linguistics.

“The term was popularised by the philosopher Pierre Rabhi through the compound la sobriété heureuse, which referred to a value system organised around living a “simpler” life in order to limit one’s impact on the environment,” she says.

“Today it is used in political debates to encourage people to reduce their energy consumption so as to avoid energy shortages, while also being presented as a tool to reduce greenhouse gas emissions.”

France has unveiled a raft of ‘sobriété’ measures, like limiting homes and office heating to a maximum of 19°C, banning lit advertising overnight, and prohibiting heated/air conditioned premises from keeping their doors open. With these measures, the country aims to reduce energy consumption by 10 per cent by 2024.

“Referring to a traditional Finnish folk dance and music similar to foxtrot, humppa, this phrase is used by critics of those who advocate for measures to address climate change, who think that making changes to address the climate crisis is nonsense,” he explains.

In short, it’s a favoured term amongst those who think climate activists are making a song and dance about nothing.

Gretini - which translates as ‘Greta’s followers’ - is another negative term.

It combines the name of Swedish environmentalist Greta Thunberg with an Italian insult, explains Simone Borghesi, the Director of FSR Climate at the European University Institute.

“[This term is an] ironic and pejorative neologism [new word] used (especially by climate change deniers) to refer to Greta Thunberg’s followers,” he says.

“The term is a riff on the word cretino (cretinuous, idiot, stupid) and is used as a synonym for this, but in the context of climate change.”

Thunberg was propelled to fame in 2018 after skipping school every Friday to hold a weekly vigil outside the Swedish Parliament.

Her solo protest sparked a wave of school strikes, with millions of children taking part in protests across the globe. The schoolgirl became a lightning rod for criticism among climate denialists, who accused her of hysteria.

Thunberg has repeatedly shot back at these critics, calling out their “hate and conspiracy campaigns.”

In lots of ways, Norway is an environmental leader. Roughly 95 per cent of its electricity is provided by hydropower, and it has the highest per capita use of electric cars in the world.

Yet oil and gas account for around half of the country’s exports. In 2021, Norway exported 1.2 million barrels of crude oil per day to other European countries.

‘Flight shame’ actually originated in nearby Sweden. It was popularised by Greta Thunberg, who publicly announced she would stop flying in order to minimise her carbon footprint. It’s now widely used throughout Scandinavia.

The vast majority of people agree that we need solutions to the climate crisis. But what form should these solutions take?

Many campaigners argue that reducing consumption is the only way to prevent climate collapse. This means keeping oil and gas in the ground, limiting meat intake, and eschewing excessive consumption like fast fashion.

In Spain, those who argue for these big lifestyle changes are labelled ‘Colapsistas.’

“Colapsistas is not a term well-liked by those who fall under this category, preferring the term decrecentistas, which means in essence “those who believe in reducing consumption as the main way to solve the climate crisis,” says Maria Gemma Alonso, Professor at the Information Science Communication Faculty of the Complutense University of Madrid.

Others look to technology, rather than behavioural change, as the main way to tackle climate change.

“This is a label referring to those who believe that with technology, [such as] renewable energy and hydrogen batteries, we can find a solution to the climate crisis without the need for lifestyle changes,” she says.

Oil and gas companies could perhaps be described as Tecno-optimistas. These fossil fuel giants often tout new technologies like carbon capture as a climate change solution. Unlike keeping oil in the ground, this wouldn’t undercut their profit margins.

These are not absolute poles in a binary debate, as most people believe we should implement a combination of these solutions. But they are often presented as opposites.

“These two terms are most often used in media debates to pit one side against the other,” Alonso says.

The climate crisis can be overwhelming. The news is full of images of natural disasters and dire statistics on ‘irreversible’ warming. This takes a mental toll. In English, we have the term ‘eco-anxiety’ - the pervasive fear that the Earth is doomed.

“It is a term that helps emphasise the fact that anyone can be seriously impacted by the climate crisis, and it can cause severe and real consequences for people,” she says.

“This is especially important for people downplaying the climate crisis because its consequences are not tangible to them.”

Many languages contain similar concepts. In Spanish, one term is ‘solastalgia’ or ‘ecoansiedad’ - environmentally-induced stress.