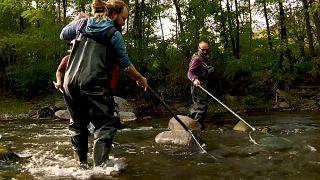 In a race against time to save the rarest fish in Europe, a team of environmentalists and experts are developing a sanctuary for the asprete, a rare species of fish also called the living fossil.

As old as the dinosaurs, it is only found in one river in Romania and it's on the brink of extinction.

While the authorities thought there were only 15 fish left in the river, a team of experts found 57 specimens in just one day of exploration.

The asprete has lived on this earth for approximately 65 million years, but in the last five decades, human activity has impacted its population to the brink of extinction.

Istvan Falka is a biologist, he says that "the Vâlsan River is something special because it had and still has one of the rarest fish species in the world." He believes it is his mission to look after it.

The experts are analysing the river in order to determine what is the best environment for the fish. Mircea Marginean is another biologist. He told Euronews Romania that they have found factors that enable the fish to spread to different sectors of the river.

"So looking at the environment, we can determine where to act in order to preserve it and to enlarge its population."

The team is creating the first scientific inventory of the asprete in 20 years. The team leader, Alex Gavan describes the asprete as a fragile and priceless barometer, that helps show the health of rivers.

"If the asprete can continue to live in these waters, this means that the ecosystem is functioning."

The main reason for the near extinction of the asprete is human activity. Despite this, in just one day, the team of experts found no less than 57 specimens.

The Romanian government is also backing this conservation effort. Tanczos Barna, the environment minister, has confirmed he is backing the project and the ministry will also help finance it.