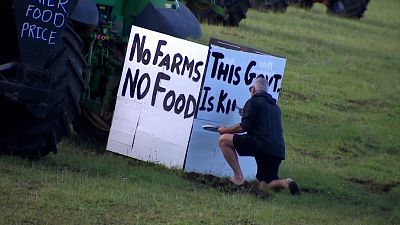 Farmers in New Zealand began protesting on Thursday over the government's plans to tax agricultural emissions in a bid to combat climate change.

A world first, the 'farm levy' could support the country’s pledge to reduce greenhouse gas emissions and become carbon neutral by 2050.

Many farmers claim the taxation could put them out of business, despite government advice that they could recoup the cost by charging more for climate-friendly products.

Under the government's proposed plan, farmers would start to pay for emissions in 2025, with the pricing yet to be finalised.

Prime Minister Jacinda Ardern says all the money collected from the proposed farm levy would be put back into the industry to fund new technology, research and incentive payments for farmers.

By reducing agricultural emissions, she adds that New Zealand’s biggest export market would gain a “competitive advantage… in a world increasingly discerning about the provenance of their food."

Agriculture Minister Damien O'Connor hails it as an exciting opportunity for New Zealand and its farmers.

“Taking the lead on agricultural emissions is both good for the environment and our economy.”

How have farmers reacted to New Zealand’s proposed farm tax?

On Thursday 20 October farmers in towns and cities across the country came out with their tractors to protest.

"It's absolutely going to destroy our community. They are the backbone of New Zealand. We need the farmers and all this over taxing - it's just got to stop," said one protester.

Many of the protests were organised by farming advocacy group, Groundswell NZ. One of their local organisers described the taxation as 'unworkable regulations'.

Federated Farmers, the industry's main lobby group, says the plan would “rip the guts out of small-town New Zealand” and see farms replaced with trees.

Federated Farmers President Andrew Hoggard says farmers have been trying to work with the government for more than two years on an emissions reduction plan that wouldn't decrease food production.

“Our plan was to keep farmers farming," Hoggard says. However, if the farm levy goes ahead, he believes farmers will be selling their farms “so fast you won’t even hear the dogs barking on the back of the ute (pickup truck) as they drive off.”

Opposition lawmakers from the conservative ACT Party say the plan would actually increase worldwide emissions by moving farming to other countries that are less efficient at making food.

Why is New Zealand proposing a tax on agricultural emissions?

There are just 5 million people in the country, but some 10 million beef and dairy cattle and 26 million sheep.

Farm animals produce gases that warm the planet, particularly methane from cattle burps and nitrous oxide from their urine.

The government has pledged to reduce greenhouse gas emissions and make the country carbon neutral by 2050. Part of that plan includes a pledge to reduce methane emissions from farm animals by 10 per cent by 2030 and by up to 47 per cent by 2050.

The new farm emissions pricing system proposals were put forward by He Waka Eke Noa, a partnership between the government, the primary sector, and iwi/Māori. The initiative aims to “equip farmers and growers to measure, manage, and reduce on-farm agricultural greenhouse gas emissions and adapt to climate change."

What do environmental activists think of New Zealand’s 'farm levy'?

While farmers have decried the new proposals, some environmental activists argue that they do not go far enough.

Consultations on the proposals are now open and they will be finalised next year.

Watch the video above to see the farmers' protest in action.