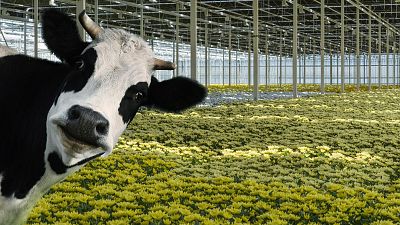 Using nitrogen from cow manure as flower feed will reduce the emissions of both industries   -   Copyright  Canva   -
By Hannah Brown  with EBU  •  Updated: 03/10/2022

Between farming animals and growing flowers, the Netherlands has a high level of nitrogen emissions.

While the government is looking for large-scale legislative solutions, part of the answer could be an old, tried-and-tested recipe: using nitrogen from animal manure in horticultural greenhouses.

By doing so, farmers get rid of their surplus nitrogen and horticulturists use less gas.

Wouter Duijvesteijn, a chrysanthemum grower in Hoek van Holland is already pioneering this technique. His flowers at the Beyond Chrysant nursery have been fed with this new recipe for a week now and he’s already impressed with the results.

“You can see how healthy they look. I can't say they're smiling, but I know they're having a good time," he jokes.

Why do plants need nitrogen?

Nitrogen is an essential nutrient for plants, as it promotes growth and photosynthesis. Though too much of it can also negatively affect plants.

Until recently, flower grower Duijvesteijn bought industrial nitrogen, made from natural gas, for his millions of chrysanthemums. But because of the high gas prices, he sought a cheaper alternative. And it’s helping the planet too.

Nitrogen is found in the urine of cows, chickens and pigs. Dairy farmers and pig farmers have an abundance of nitrogen which can be harmful for the environment.

By switching to ‘cow nitrogen’, flower growers would not only help farmers to get rid of their surplus, but would reduce the amount of nitrogen being produced overall and save money.

Watch the video above to learn more about reusing cow manure.