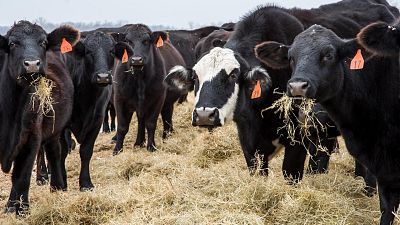 Irish dairy farmers could be forced to kill livestock just years after being encouraged to ramp up production.   -   Copyright  Canva
By Angela Symons  & Thomas Blade  •  Updated: 31/08/2022

Irish farmers could be forced to cull cattle to meet climate goals.

Greenhouse gas emissions in Ireland’s agriculture industry must be reduced by 25 per cent by 2030. This is part of the country’s latest Climate Action Plan, which pledges to halve overall carbon emissions by 2030 and reach net zero by 2050.

In Ireland, cattle outnumber people and agriculture accounts for over 37 per cent of CO2 emissions. Ireland also has the highest methane emissions per capita of all EU member states, with much of this due to beef production.

Irish farmers could be forced into bankruptcy by climate targets

Calls to reduce emissions are at odds with government advice to ramp up dairy farming in 2015 to exploit the end of EU milk quotas.

After more than 30 years of being constrained by milk production caps, the policy change led to increased output by Irish dairy farmers, who invested heavily in expansion. But now they are being forced to scale back to meet climate targets.

“There's a huge challenge for our industry and how we arrive at the reductions without cutting the herd.”

When the Climate Action Plan was first announced in November 2021, Irish Farmers Association took to the streets in protest.

At the time, a report from KPMG on the impact of Ireland's carbon emissions targets predicted that56,400 agricultural jobs would be lost and the beef farming industry would need to be cut by 22 per cent to reach 2030 goals, which then stood at 30 per cent reduction for the agriculture sector.

Cattle culls are not compulsory, but they may be inevitable

Although the Irish government has not announced a compulsory cattle cull, McCormack sees it as an inevitable outcome of the climate targets.

“We see them culling through the back door… through the nitrates regulation,” which contains measures to protect surface waters and groundwater from nutrient pollution arising from agricultural sources.

Various practices are already widespread in Ireland to reduce the environmental impact of agriculture, according to McCormack. These include the use of ruminant feed additives, which encourage more effective feed conversion, low-emission slurry spreading techniques, and protected urea, which reduces the ammonia released from fertiliser.

Though he acknowledges that more needs to be done to meet climate targets, he describes reducing the production of food in Ireland as a “last resort” for the country’s growing population.

Why does Ireland need to reduce its CO2 emissions?

In 2019, the Irish government declared a climate and biodiversity emergency. This was in response to growing biodiversity loss due to climate change.

At that time, farmers were asked to switch fertilisers and re-wet boglands but not reduce herds.

As an island nation, Ireland is also particularly at risk of flooding and coastal erosion from rising sea levels.

Ireland’s 2021 Climate Action Plan aims to put the country on a “more sustainable path” and protect it from the “devastating consequences of climate change” by investing in offshore wind, cutting-edge agriculture and eco-friendly home improvements.