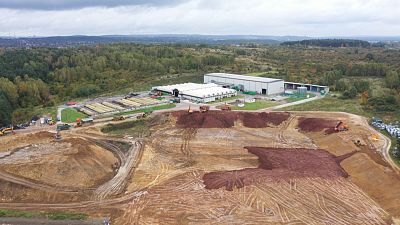 Methane is a powerful greenhouse gas, 84 times more potent than carbon dioxide over a 20-year period. so cutting methane is part of the solution to slow global warming.

And landfill rubbish sites are an important source of the gas. Yet many fail to manage the issue.

"Generally, most landfill sites really don't care how the organic element is stored," says Jaroslaw Necki, Associate Professor Of Atmospheric Physics, at AGH Kraków University Of Science And Technology. "So it's a serious problem and it needs to be addressed".

So how can rubbish dumps reduce their methane emissions?

Setting the example in Poland

At Balin municipal waste disposal plant in southern Poland, they have been working with Jaroslaw Necki to improve their methane capture systems and reduce their emissions. The landfill site near Kraków collects hundreds of tonnes of household waste every day; waste which will produce methane if it's just left to decompose without enough air.

So, after sorting, the waste is composted in the presence of a good flow of oxygen - a first step to stem the emission of methane.

The waste is eventually compacted and covered in earth. Once underground, it continues to produce methane, so the operators extract the gas and use it for power.

"We have a system for active gas extraction and the methane is actually extracted out of the landfill under pressure," says Krolikowski. "There's a negative pressure or vacuum in these pipes that brings the biogas into a bioelectric plant where electricity is produced."

Methane is lighter than air, and it continues to escape, despite the vacuum pumps.  So a second level of prevention is needed. Marcin Kalembka, Methane Analyst with IT4 Tech, was trained in the skills of a 'methane detective' with Assistant Professor Necki, and now scans the Belin site every few months to look for leaks.

"Here we have detected a small leak but it is quite small," he tells Euronews. "Now we need to mark it on the maps and pass this information to the landfill managers so that they can take corrective action."

An action that makes sense on many levels

In the EU, a quarter of man-made methane emissions come from waste, and many landfill sites aren't properly equipped to capture the gas.

This is definitely a quicker measure than reducing carbon emissions.

Capturing the methane from waste does not fully cut down emissions: in the end, when methane is burnt the carbon does enter the atmosphere in the form of CO2. However, capturing the gas cuts down on unnecessary methane emissions and allows us to replace fossil fuels with a more sustainable alternative.

And doing so makes sense on many levels, says  Assistant Professor Necki.

"This is definitely a quicker measure than reducing carbon emissions," he argues. "Reducing methane emissions seems easy, if only because it brings a clear financial benefit to the companies involved, too. Therefore, it is profitable not only for climate reasons but also for financial reasons."

Of course, reducing methane emissions from waste is just one part of the huge greenhouse gas reduction task ahead of us as we aim to meet the goals of the Paris Agreement.

The fourth warmest September on record

The latest data from the Copernicus Climate Change Service shows that on a global scale, temperatures in September were 0.3 degrees Celsius above the 1991-2020 average. That makes it the joint fourth warmest September on record.

In the graphic below, you can see in blue that much of Europe, Russia and Siberia were actually cooler than average last month. It was also cooler across Australia, southern Brazil, Paraguay, Uruguay, and northern Argentina.

But there's also a huge area of dark red across Greenland, where temperatures were over 8 degrees Celsius above average last month.

Jason Box is Professor In Glaciology, Geological Survey of Denmark and Greenland. He was in Greenland in September and says the abnormal temperatures were due to unusually warm weather from the south:

"Normally in September the melt season is drawing to a close," he says. "And because of this persistent circulation drawing air from the south, you had temperatures that were well above melting, peaking even at 10 Celsius above melting, so it was raining instead of snowing. Then Hurricane Fiona brought some extra heat and moisture to Greenland at the end of September."