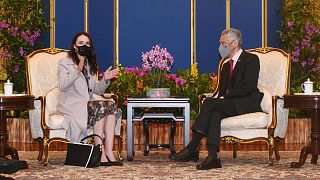 Singapore and New Zealand will cooperate on green technologies in the fight against climate change, prime ministers from both countries said Tuesday.

The joint efforts will be part of the new climate change and green economy pillar added to Singapore and New Zealand’s enhanced partnership. It will involve adopting low-carbon and green technologies, Prime Ministers Lee Hsien Loong of Singapore and Jacinda Ardern of New Zealand said at a news conference on Tuesday.

“We cannot collectively simply return to a high carbon emissions business-as-usual approach. Globally, we have entered what must be an age of action, and that includes the private sector as well,” said Ardern.

“No government can do this alone. It takes a strong joint effort,” she said.

No government can do this alone. It takes a strong joint effort.

Ardern arrived in Singapore on Monday for a three-day official visit to meet with Singapore’s President Halimah Yacob as well as Lee.

Lee said that both countries will work on initiatives around energy transition technology, carbon markets, sustainable transport and waste management.

“This new culture of cooperation reflects our shared commitment to implement the Paris Agreement and work together to seize growth opportunities in a green economy,” he said.

What else did the Prime Ministers of Singapore and New Zealand talk about?

Lee also said Tuesday that both Singapore and New Zealand have strongly condemned Russia’s invasion of Ukraine, as both countries are “staunch supporters” of international law and the principles enshrined in the United Nations Charter.

“What is happening in Ukraine is an assault on a country’s sovereignty and their own territorial integrity,” Ardern said. She added that New Zealand will also continue to encourage China to acknowledge what the “Ukraine conflict represents for the world.”

“The geopolitical uncertainties, supply chain vulnerabilities and rising protectionism make it all the more important for countries to work together to find a path forward and identify win-win opportunities,” he said.

Lee said that both Singapore and New Zealand had a “vested interest” in China-US relations being stable, and added that he hoped “wisdom will prevail” and that the conflict happening in Ukraine would not make things more complicated.

Ardern affirmed that New Zealand and Singapore were close and natural partners of trade and that both remain committed to free and open rules-based trade and investment.

“There are also opportunities for our businesses to partner and deliver exports and services to South and Southeast Asia in coming decades,” she said.

“This is especially important at a time like this with global uncertainty around COVID and Ukraine.”

Both leaders also discussed the reopening of borders to tourists from each other's countries. Currently, Singapore is open to New Zealanders to visit and Singaporean tourists likewise will be able to visit New Zealand from the beginning of May.

Singapore’s Lee also noted that other countries have asked to join the Digital Economy Partnership Agreement that Singapore, New Zealand and Chile signed together. The DEPA, which aims to make it easier for businesses to conduct trade activities digitally, went into effect in 2021.

During Ardern’s visit, Singapore also named a new orchid hybrid in her honour — the Dendrobium Jacinda Ardern. Singapore often names orchids after visiting politicians and dignitaries, as well as celebrities and important guests.