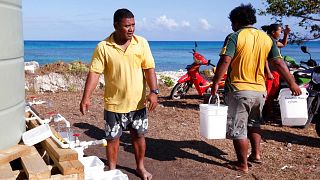 Tuvalu is one of the nations calling for adequate climate funding.   -   Copyright  Alastair Grant/Copyright 2021 The Associated Press. All rights reserved.
By Rosie Frost  •  Updated: 17/12/2021

High-income nations promised to meet the target of supplying $100bn (€90 billion) in climate finance by 2023 at COP26 in November. But developing nations want to know more about how they plan to achieve it.

After having missed their goal of supplying this money by 2020, they expressed “deep regret” for not having reached it earlier.

“While we know we are not yet meeting it soon enough, we will work closely with developing countries to do more and to reach the target sooner,” UK Chancellor Rishi Sunak said at the Glasgow climate conference.

Though lots of ideas for bridging the funding gap came out of COP26, what do those on the receiving end say needs to be done with it?

Just last week, UN climate chief Patricia Espinosa told Reuters that she would be working with wealthy countries to create a plan for delivering the promised $100 billion a year of climate finance.

She emphasised that this task was especially important to “give a lot of confidence to developing countries before the COP starts in Egypt”.

But those who need the money the most say they need more information about what the $100 bn promise really means.

“We want more details about the $100 billion so that it isn’t just a pledge that still hasn’t been met,” Racquel Moses, CEO of the Caribbean Climate-Smart Accelerator told Euronews Green at COP26.

She explained that for countries on the front lines of the climate crisis, there needs to be more information about how this funding works, where it will be available and what projects it can be used for.

We need to understand exactly where it is, who has it, how it's going to be distributed.

What exactly should the money go towards?

The money is being promised by developed countries with high greenhouse gas emissions. It is meant to be spent on mitigating the effects of climate change from reducing emissions to adapting to the immediate impacts of the crisis.

Some of the most vulnerable nations are also some of the poorest. Including Yemen where funding is going towards improving food security for those facing extended droughts and water shortages.

Island nations are also among those that would benefit the most. With the threat of disappearing completely due to rising sea levels and land erosion, places like Tuvalu have called for urgent funding to help them adapt.

Will it be a grant or a loan?

One of the most important issues is whether the money will be delivered as grants or loans.

After dealing with the impacts of the climate crisis and growing costs of the COVID-19 pandemic, less developed nations have already “borrowed up to their eyeballs.”

Sonam P Wangdi, chair of the Least Developed Countries (LDC) group, pointed out at the Glasgow climate conference that 70 per cent of the money they receive is in the form of loans they “can’t afford”.

Climate funding that comes in this form means more debt for countries that are already struggling. Some say this is like charging developing nations for the adaptations they need - in the face of climate change.

You'll be charging them to repair the damage you've done to their countries through the climate crisis.

“If you are just lending that money, then the countries will pay back interest. So you'll be charging them to repair the damage you've done to their countries through the climate crisis,” Molly Scott Cato, an economics professor and ex-Green MEP tells Euronews Green.

It is also a problem if the money comes with conditions attached, “that might mean they have to displace farmers from their land,” concludes Scott Cato.