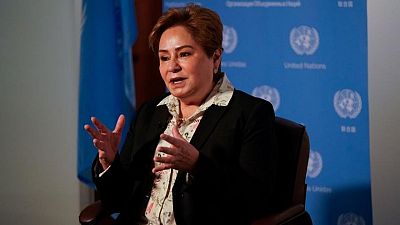 The world must get to work on quickly reducing emissions to limit warming to 1.5 degrees Celsius – a goal that remains within reach under the Glasgow Climate Pact, the UN’s climate agency chief said.

In her first interview since the Glasgow climate summit ended on 13 November, UN Framework Convention on Climate Change (UNFCCC) Executive Secretary Patricia Espinosa told Reuters that deals and decisions made last month in Glasgow gave countries many tasks ahead of the next UN climate conference in Sharm El-Sheikh, Egypt, in November 2022.

“We have so much work to do,” she told Reuters on Tuesday in Washington. “We really have a very short time to produce results.”

The Glasgow Climate Pact, backed by nearly 200 countries, for the first time targeted fossil fuels -- the biggest driver of manmade global warming. It asks governments to accelerate emissions cuts, and promises more money for poor countries struggling to adapt to a warmer world.

The two-week conference that yielded the pact also ushered in pledges from countries, companies and investors to clean up emissions from cars and planes, curb the powerful greenhouse gas methane, protect forests and bolster green finance – all voluntary commitments that will require tracking and scrutiny.

Nevertheless, the few key victories at the Glasgow talks left Espinosa “hopeful,” she said. One of those victories saw delegates agree on rules for international trading of carbon offsets to meet national climate targets.

The talks also marked an important step forward in recognizing that vulnerable countries need more financial support both to transition away from fossil fuels and to prepare for climate impacts like stronger storms and heatwaves.

And the pact’s mentioning coal and fossil fuels was a major achievement, she said – even if China, India and other coal-dependent nations demanded that the call to “phase out” coal-fired power be changed to “phase down.”

That task is especially important, as it “will give a lot of confidence to developing countries before the COP starts in Egypt.”

Espinosa, a former foreign minister for Mexico, said countries will also be working to launch the so-called Santiago Network, a new secretariat within the UNFCCC created to help countries develop strategies to address the impacts of loss and damages caused by climate change.

Also planned is a new system for countries to update their climate targets more frequently.

The importance of adequate climate finance

Espinosa said she will turn her attention to development banks and financial institutions, which will be central to ensuring that developing and vulnerable nations can access needed funds and low-cost loans.

In the coming weeks, the UN climate chief plans to urge international financial institutions like the World Bank and International Monetary Fund to prioritize investments in projects that help developing nations wean off fossil fuels and strengthen their resilience against climate impacts. Some NGOs and former officials have been critical of the Bank's efforts on climate.

Developed countries need to reinforce this message, she said, and she will press countries with influence on the boards of these institutions.

“The question of how to change the portfolio of the (World) Bank is challenging,” she said. But “it is just necessary. We have no choice.”

Social policy will be key to EU's green transition | View