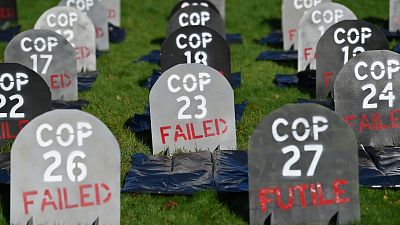 No UN climate conference has seen such a blizzard of promising climate statements in such a short space of time as the 26th conference of the parties – COP26 – hosted in Glasgow. The conference concluded with 197 countries agreeing to a new climate deal, the Glasgow Climate Pact.

Countries had made varying commitments to limit emissions by 2030, known as “nationally determined contributions” (NDCs), in advance of COP26. Many then added long-term net zero statements to their NDCs during the conference – such as the UK’s net zero by 2050 pledge – as well as other, non-binding statements relating to issue such as renewable energy.

That leaves three different sources of emissions claims to assess to take stock of where we now stand.

This COP has seen a slew of ambitious statements – including the first-ever alliance targeting fossil fuel extraction and a 220-member climate action coalition – but it’s difficult to rely on their implementation.

Many statements were made by coalitions of small nations on issues such as deforestation, methane emissions and coal use. But these aren’t binding agreements among all 197 parties to the UN Framework Convention on Climate Change (UNFCCC) who take part in COP. They are statements of intention which, unfortunately, are not always fulfilled.

And although climate targets set by the Paris Climate Agreement include pursuing efforts to limit surface warming of the planet to 1.5°C above its pre-industrial average by 2100, current emissions pledges will still likely result in warming of over 2°C. This disparity has been called the “credibility gap”.

In a world warmed by 1.5 °C, around 14% of the world’s 7.9 billion people would experience severe heatwaves at least once every five years. At 2°C of warming, the number of people affected would be three times greater, exposing an additional 1.7 billion people to life-threatening extreme heat.

To achieve the 1.5°C target, global emissions need to fall by 45% by 2030. But an analysis by award-winning climate analysis site Carbon Brief found that current climate policies will lead to surface warming of around 2.7°C by 2100. If countries manage to fulfil all their NDCs for 2030 and deliver on statements made at COP26, projected warming falls to around 2.4°C. If countries also meet their targets for reaching net zero, this could still mean 1.8°C of warming.

The final hours of a COP are when various clauses become strengthened and weakened, from first to second to third to final draft. These hours were mainly spent debating three questions:

NDCs: Would the Glasgow Climate Pact commit countries to reducing emissions as fast as possible by bringing them back each year to submit more ambitious NDCs?

Former UN climate chief Christiana Figueres previously suggested that countries strengthen their NDCs for 2030 in 2022, rather than in 2025. In its final version, the pact requests – not compels – countries to do this. It remains to be seen how countries will respond, however – in the hours after COP, the US and Australia had already declined requests to improve their NDCs next year.

Fossil fuels: Would the pact include firm commitments for winding down fossil fuel production and finalise rules for emissions trading and offsetting carbon pollution?

For the first time in a UN climate agreement, all four drafts of the Pact – including the final version – contained a statement on fossil fuels. Unfortunately, this final statement was heavily watered down.

It was hoped this critical statement would be strengthened by the recently announced collaborative commitment between the current (China) and historically (US) largest greenhouse gas emitters to meet 1.5°C targets in the 2020s.

In the end, it was this alliance that weakened the wording on coal. Consensus was only reached when parties agreed, with visible sorrow, to accept a late intervention to change the “phasing out” of coal to “phasing down”. It is unsurprising that the greatest pushback was on fossil fuels, an industry that received US$5.9tn (£4.4tn) of subsidies worldwide in 2020.

Finance: Would the agreement provide adequate levels of financial aid to help developing countries adapt to and survive climate change?

Other critical elements of the pact revolve around financial elements of climate change, including setting prices for carbon trading, funding climate adaptation and paying for loss and damage caused by extreme weather. A statement in an early draft sought to establish financial support to “avert, minimise and address loss and damage associated with the adverse effects of climate change in developing countries”.

This would have established the Glasgow Loss and Damage Facility for channelling money to support people on the frontline of climate change impacts. However, this was blocked by the EU and US, a blow for developing world nations.

On a more positive note, the pact commits developed nations to doubling funding to help developing nations adapt to climate change by 2025. Plus carbon trading rules were finally agreed, albeit with potential loopholes for companies wishing to use carbon offsetting to continue emitting while paying others to leave carbon in the ground.

Views on the pact’s success are deeply polarised. The COP presidency got the pact over the line only by asking for some to make sacrifices and others to accept smaller wins, in what COP president Alok Sharma argued was overall a balanced agreement. The entire problem with climate change, however, is that it is the result of profound historical and ongoing imbalance.

The call to move beyond coal and fossil fuels subsidies, and to “keep 1.5 alive”, survived – albeit it in a critical condition. But those hailing COP26 as a success owe profound gratitude to the developing world nations who accepted the pact and chose not to ask for the balance on climate change to be paid in full – yet.

This story is part of The Conversation’s coverage on COP26, the Glasgow climate conference, by experts from around the world.
Amid a rising tide of climate news and stories, The Conversation is here to clear the air and make sure you get information you can trust. More.

This article is republished from The Conversation under a Creative Commons license. Read the original article.

Green financing isn't effective but Europe can fix it | View