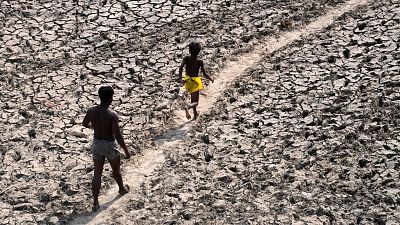 A man and a boy walk across the almost dried up bed of river Yamuna following hot weather in New Delhi, India.   -   Copyright  AP Photo/Manish Swarup, File
By Jill Pole  with Reuters  •  Updated: 13/07/2022

The economic impact of top greenhouse gas emitters on other countries can now be calculated thanks to a new study published on Tuesday.

Historically, rich countries have emitted the most greenhouse gases. It has led environmental activists and some government officials to call on these industrialised nations to pay the highest amounts and even offer reparations to poorer countries.

The study from US-based Dartmouth College has been billed as a potential game-changer for climate litigation as figures could be used in courtrooms or international climate negotiations to work out payments from countries that burn more fossil fuels.

Researchers found that a small group of heavy polluters has caused trillions of dollars of economic losses due to warming caused by their emissions. The top 10 global emitters caused more than two-thirds of losses worldwide. Warmer and poorer countries in the Global South have been hit hardest.

"Greenhouse gases emitted in one country cause warming in another, and that warming can depress economic growth," says Justin Mankin, the study's senior researcher.

Which country's emissions have had the biggest economic impact?

In total, these five countries account for around €6 trillion in cumulative losses - roughly 11 per cent of global Gross Domestic Product (GDP) during the study period.

The analysis also breaks the data down to show the damage done by a single emitter to another individual country's economy.

This research provides legally valuable estimates of the financial damages individual nations have suffered due to other countries' climate-changing activities.

"This research provides legally valuable estimates of the financial damages individual nations have suffered due to other countries' climate-changing activities," says Mankin.

The analysis looked at how much carbon each nation emitted and the impact that had on global warming. Researchers then connected that to studies that show how rising temperatures have impacted economies around the world.

Two million possible values for each country-to-country interaction were sampled and a supercomputer was used to crunch a total of 11 trillion values to quantify and address uncertainties around cause-and-effect.

How do rising temperatures impact economies in the Global South?

Warmer temperatures can cause economic losses for a country in a lot of ways such as lowering agricultural yields or reducing labour productivity through heat stress.

US emissions cost Mexico a total of €79 billion of lost GDP between 1990 and 2014, according to the analysis. The country also caused €308 billion in economic climate damage to Brazil,  €255 billion to India and €123 billion to Indonesia.

Conversely, for some cooler countries in the north, warming can raise output by boosting crop yields. The US, for example, has benefitted by more than €182 billion from the global warming it caused and its impact on Canada was a gain of €246 billion.

In the past two decades, the number of climate-related lawsuits has risen from barely a handful to well over a thousand. But these have mainly targeted major oil companies and other businesses rather than attempting to pin liability on any given country's emissions.

"This research provides an answer to the question of whether there is a scientific basis for climate liability claims—the answer is yes," Callahan adds.

"We have quantified each nation’s culpability for historical temperature-driven income changes in every other country."