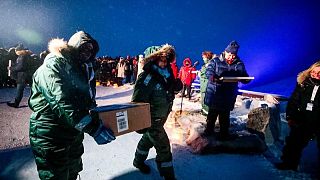 A vault built on an Arctic island to preserve the world's crop seeds from war, disease and other catastrophes received new deposits on Wednesday - including for the first time from Iraq and Uruguay.

The Svalbard Global Seed Vault, set in permafrost caves on Spitsbergen island halfway between mainland Europe and the North Pole, is only opened three times a year to limit its seeds' exposure to the outside world.

More than 45,000 seed samples from 13 gene banks from Asia, Australia, Europe and Latin America were added, lifting the total number of deposits to more than 1.2 million for the first time, according to Norway's Ministry of Agriculture and Food.

What are seed gene banks?

Seed gene banks are institutions that conserve and study the diversity of crops. They allow researchers to develop varieties that are resilient to pests, disease and other adversities. As we adapt and prepare for the known and unknown impacts of climate change, gene banks are key to the survival of agriculture.

Copies of complete seed collections are stored in gene banks away from the main seed collection. These can be called on by researchers and farmers in case the original collection is destroyed or damaged. Crops can then be recalled from these seeds.

Why are countries depositing seeds in an Arctic vault?

Launched in 2008, the vault acts as a last resort for national and regional gene banks, and played an essential role between 2015 and 2019 in rebuilding seed collections damaged during the war in Syria.

Scientists at the ICARDA International Genebank in Syria lost access to their site during the conflict. Copies of seeds stored at the Svalbard Global Seed Vault were used to re-establish the seed collection in Lebanon and Morocco, and new copies were sent back to the Nordic vault for safekeeping.

The vault functions as an insurance for current and future food supply and for local food security.

"The vault functions as an insurance for current and future food supply and for local food security," said Norwegian International Development Minister Anne Beathe Tvinnereim at the time.

The same process could have been possible for Ukraine's national seed bank, which was jeopardised by Russian shelling earlier this year, had it been completely copied.

Iraq's first deposit will consist of 418 seed samples of wild and cultivated species, including wheat and rice, while Uruguay's initial delivery comes in the form of 1,892 seeds of wheat and barley.

"The participation of countries in the Seed Vault's mission is vital to underwriting the life insurance that genetic diversity represents," says Stefan Schmitz, executive director of the Crop Trust which manages the facility alongside Norway.

South Korea and Mexico were also among the nations making deposits on Wednesday.

The world used to cultivate over 6,000 different plants but UN experts say we now get about 40 per cent of our calories from three main crops - maize, wheat and rice - making food supplies vulnerable if climate change causes harvests to fail.

Earlier this year, gene banks from Sudan, Uganda, New Zealand, Germany and Lebanon deposited seeds, including millet, sorghum and wheat, as back-ups to their own collections.