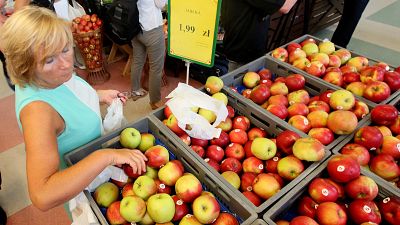 A high number of fruit and veg in the EU were found to be laced with pesticides   -   Copyright  Czarek Sokolowski/AP
By Tim Gallagher  •  Updated: 25/05/2022

A new study has revealed a shocking rise in toxic pesticides contaminating fruit on the shop shelves of Europe.

Analysis carried out by Pesticide Action Network (PAN) Europe found that there had been a 53 per cent rise in contaminated produce in the last nine years.

The study contradicts claims by the European Commission that farmers are using less pesticides, which are linked to cancer and other serious illnesses.

“Consumers are now in an awful position, told to eat fresh fruit, much of which is contaminated with the most toxic pesticide residues linked to serious health impacts.”

Which fruit and veg are contaminated by pesticides?

The research took place between 2011 - the year that governments were supposed to start banning pesticides - and 2019.

Rather than a decrease in the substances, it shows they actually increased in that time frame.

A third of all apples, Europe's most grown and consumed fruit, had toxic pesticides on them.

In 2019 it was found that one out of three fruit samples were contaminated; half of all cherries sampled and half of all pears and peaches.

Meanwhile a third of all apples, Europe's most grown and consumed fruit, had toxic pesticides on them.

The most contaminated fruits overall were blackberries, peaches, and strawberries.

Vegetables are less prone to insects and disease, so pesticide contamination is lower. But the analysis still showed a rise in contamination of nearly one-fifth at 19 per cent.

The most contaminated vegetables were celery with 54 per cent of samples contaminated and celeriac at 45 per cent.

Meanwhile, nearly a third of samples of the superfood favourite kale were found to contain traces of pesticides.

Which countries grow the most contaminated produce?

The worst offenders for growing the chemical-laced fruit and vegetables were Belgium with 34 per cent of samples contaminated and Ireland at 26 per cent.

Just over one-fifth of fruit and veg in France, Germany and Italy were found to contain traces of pesticides.

An increase in chemical combinations was also found, multiplying the risk to consumers. These ‘chemical cocktails’ are known to multiply health impacts, with unknown consequences.

Researchers found that half of the pears sampled throughout Europe are contaminated with as many as 5 powerful chemical agents. This figure rises to a shocking 87 percent in Belgium and 85 per cent in Portugal.

“Syngenta, Bayer and other chemical giants will say these trace pesticides are perfectly safe,” says Roynel.

“But medical experts say some chemicals have no safe limit and that applies to most of these pesticides.”

What is the EU doing about pesticides?

Support our brand new campaign “Ban #Toxic12”. Dramatic rise in the most toxic #pesticides found on fruits & vegetables sold in Europe. These chemicals should have been banned long ago. EU governments are failing their legal obligations ?? #BanToxic12
➡️https://t.co/mO0fbdxxozpic.twitter.com/8WVBfXYKip

Governments have been obliged to phase out the toxic pesticides found in the study since an EU directive 2011, but a European Commission report in 2019 found that none have been phased-out.

Despite this, the EU claims there was a 12 per cent drop in 2019 in the use of pesticides that contain the agents.

“It is clear to us that governments have no intention of banning these pesticides, whatever the law says,” says Roynel.

“It is clear to us that governments have no intention of banning these pesticides, whatever the law says,” says Roynel.

“They are too afraid of the farming lobby, which depends on powerful chemicals and a broken agricultural model.”

Over a third of Europeans are concerned about pesticide food contamination. In 2017, the second most popular EU recognised petition was lodged, calling for a complete ban of pesticides it reach over 1 million signatures.

The European Commission is set to announce new pesticide reduction targets on 22 June as part of its nature protection package which will also see nature restoration targets announced.

The commission wants binding new rules to cut pesticide use in half by 2030, but PAN Europe claims lobbyists are trying to water these targets down.

What can consumers do to avoid pesticides in fruit?

Despite the grim tidings consumers are not powerless when it comes to pesticide-laced fruit.

“We urge people to buy organic fruit this summer, especially if they are pregnant or feeding young children because the risks are much reduced or zero,” says Roynel.