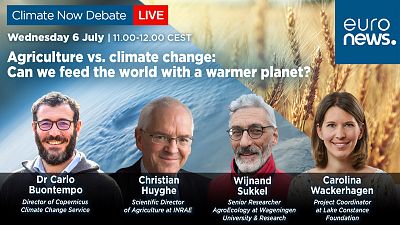 Global agricultural production is already being affected by climate change. From plant growth to crop yields, our food security is being challenged on multiple fronts, with droughts, higher temperatures and flooding all taking their toll.

As weather patterns become more variable across the globe, what can be done to make our food crops more resilient to a warming world?

In this Climate Now debate, our expert panel discussed the impact of heatwaves, droughts and floods on food production across Europe.

"We have seen, this year, some really unprecedented water scarcity and drought conditions, especially in northern Italy and this is due to a combination of factors," says Dr Carlo Buontempo, Director, Copernicus Climate Change Service.

"On the one hand we have seen above average precipitation in spring and also above average temperature. But what is even more worrying is that if we look at the southern Alps as a whole, there is much less snow this year than there used to be."

The panel also dicussed the need for climate adaptation across the board, from farmers having to adjust to lower yields, to a shift away from monoculture crops towards diversification.

"And that is one of the main instruments we're working with in the designing of new farms and production systems, it's making use of diversity instead of excluding it."

Watch the full debate in the video player below:

What are the current pressures on agriculture?

"During nearly one century of records, the dates of harvest were fairly stable, and suddenly by 1980 there is a quick change," says Christian Huyghe, Scientific Director of Agriculture at INRAE.

In northern regions such as Alsace for example, harvest times have moved forward four weeks in less than 40 years. Scientists have solid evidence this is due to climate change, as the plants react to 'thermal time'.

"Perennial crops such as grapes are a really good way of measuring the real impact [of climate change]," Christian Huyghe says.

Early blooming on the vines means more exposure to late frosts, while earlier harvests mean higher degrees of alcohol, as there is more sugar present in the grapes. Premature harvests imply that farmers will also need to invest in equipment such as cooling systems, as the grapes harvested will be too warm to process in the same way.

How can farmers adapt to climate change?

According to Copernicus, 90 per cent of the food produced globally is consumed in the countries which produce it. And while crop yields can vary by as much as 25 per cent from one year to the next, global production as a whole fluctuates by less than 3 per cent each year.

Localised food production is, therefore, key to ensuring food security, but with weather patterns altering due to climate change, how can farms adapt to changing circumstances?

"What has proven the most effective way is to have pioneer farms or demonstration farms in areas at a local level and to organise field days on farms so there can be a knowledge exchange between farmers," says Carolina Wackerhagen, Project Coordinator at Lake Constance Foundation.

This gives farmers the opportunity to get practical advice on how to adapt their farms to the changing weather.

"Also with the help of tools and apps we have created with Copernicus, we have been using the newest projection data and linking it with indicators relevant for the agricultural sector."

For example, this gives wheat farmers the ability to look up the number of days in central Europe where temperatures will be above 25 degrees in May and June, helping them to predict the size of their yields.

Intensive agriculture contributes to the climate crisis too, with the industry releasing significant amounts of methane and nitrous oxide, while also encouraging monoculture and harming biodiversity.

According to the UN Environment Programme (UNEP), our global food system is the primary driver of biodiversity loss.

According to the UN Environment Programme (UNEP), our global food system is the primary driver of biodiversity loss. Their 2021 report ‘Food system impacts on biodiversity loss’, produced in partnership with Chatham House and Compassion in World Farming, states that agriculture is a threat to the 86 per cent of global species at risk of extinction.

The report also highlights that the global push to produce cheaper food over the past few decades means that the agricultural industry is now responsible for around 30 per cent of human-produced emissions.

Although much of the damage is being done by animal agriculture, monocrop agriculture is also leading to widespread issues with biodiversity and habitat loss too.

"We have to be aware that we cannot go on producing the way we have until now with huge monocultures," says Wijnand Sukkel.

So how should farmers produce food in the future? Carolina Wackerhagen has some suggestions.

"Farmers need to come away from the idea of having high yields, to instead having stable yields," she explains.

"When we talk to farmers they're always comparing yields saying, 'I have a higher yield than you', so it's trying to get them away from thinking like this."

Moving the focus away from high yield farming will help growers to transition from single crop farms, too. In the future, Carolina Wackerhagen hopes to see a range of measures in place on farms across Europe.

"Farmers going away from monocultures, diversifying the farms, spreading the risk and having green cover over the whole year. Also having islands of biodiversity, so thinking about the big picture," are all things she would like to see in 10 years time.

The weather and water problem

Monocropping is just part of the problem though. Variable weather systems and water shortages also need to be addressed if we are to maintain food security in the future.

In Europe, due to the gradual shifting of the seasons - spring arrived earlier by 0.3 days per year between 2000 and 2016 according to this study - wheat crops are ready to harvest earlier in the year too. As a result, wheat plants are not able to absorb as much sunlight as in the past, restricting growth.

While there is the option of growing a second wheat harvest, this requires more water to produce, and **water is becoming scarcer.
**

Although overall precipitation levels in Europe are similar to decades past, rain is falling in much shorter and more extreme bursts.

"We have longer dry spells and we certainly have more intense precipitation. We recently had a couple of extraordinary extremes which were recently unthinkable, where up to a 100 millimetres of precipitation fell in the space of a few hours," says Carlo Buontempo.

The projections point to further unsettled weather to come too, with the water cycle predicted to continue to change.

"The trick is to use the excess water you get with heavy rainfall and not get rid of it as quickly as possible by pumping it into the sea, but keeping it in the system and use it for dry periods, that's the trick," explains Wijnand Sukkel.

How can we grow more resilient crops?

The use of pesticides and herbicides within the agricultural industry also needs to be urgently addressed if habitats and ecosystems are to be restored.

According to a 2019 paper from the Food and Agricultural Organisation of the UN (FAO) titled ‘The State of the World Biodiversity for Food and Agriculture’, of the 6,000 different plant species used for food, just nine - including wheat, rice and maize - account for 66 per cent of total crop production.

Over-reliance on just a handful of crops makes them more susceptible to pests and diseases and weakens and reduces soil fertility.

Over-reliance on just a handful of crops makes them more susceptible to pests and diseases and weakens and reduces soil fertility. This in turn encourages the use of chemical fertilisers to improve the fertility which has been lost.

Warmer temperatures are also increasing the number and variety of pests and diseases attacking crops in Europe, too. So what can be done to tackle this?

"The climate is going to become compatible with new pests and diseases. And when you have a pest or disease coming in it will never bring its own regulators, so you have new ones coming in without regulators. You get into a system where minor changes have a dramatic impact," says INRAE's Christian Huyghe.

"Diversification is something that is very, very important. By combining crops, we can also reduce a lot the impact on the evironment," he concludes.

Watch the video above to see our panellists discuss these topics and more.

Carolina Wackerhagen is an environmental scientist and project coordinator at the Lake Constance Foundation. Since 2016, she has worked in the field of agriculture and the food sector, with a focus on sustainable agricultural systems.

Wijnand Sukkel is a Senior Researcher at Wageningen University and Research Centre at the Farm of the Future research station. Wijnand is an agro-ecologist who is currently developing farming systems that can meet a broad set of sustainability challenges, including resilience and regeneration targets.

Doctor of Agricultural Engineering and Director of Research in Plant Genetics and Improvement at INRAE, Christian Huyghe is currently Scientific Director of Agriculture at INRAE. He is in charge of issues related to the changes of production systems towards multi-performance, partnerships with technical institutes and cooperatives and the general issue of innovation in agriculture