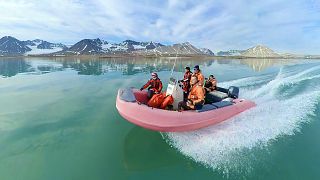 The Arctic is warming faster than any other place on the planet, while its wildlife is being slowly poisoned by industrial toxins brought by the wind and sea currents. In Svalbard, next to the North Pole, scientists from Europe and around the world are studying these problems. Ocean travelled to the Norwegian archipelago to meet them and find out more.

Here in Svalbard, we are just 1300 kilometres away from the North Pole, but it doesn’t feel that cold at all — in fact, Longyearbyen, the place behind me, is the fastest warming town on Earth. The temperatures here have risen by 4 degrees Celsius over the last 50 years.

Svalbard in the Arctic Ocean is increasingly feeling the heat of climate change. Temperatures here are rising dangerously fast, altering the land, sea and air.

With less than 2,500 permanent residents, Longyearbyen is a popular tourist destination and an important centre for Arctic research.

Founded as a mining town in the early 1900s, it still has a mine and a coal-fired power station - the last in Norway.

But that page in Svalbard’s history is about to turn. With climate change endangering fauna and putting the local communities at risk, Longyearbyen is preparing to shift fully to renewables in the coming years.

The increasingly extreme weather is already taking its toll. The town had to build snow barriers and declare ten per cent of its houses unsafe after a local man and a two-year-old lost their lives after a sudden avalanche a few years ago.

Those living in the Arctic see the ground literally shifting beneath their feet. Kim Holmén, a professor of climate and environment and senior advisor at the Norwegian Polar Institute, has been working in Svalbard for 35 years. Just outside Longyearbyen, he shows us large swaths of soil damaged by thawing permafrost.

This process not only endangers roads and buildings across the Arctic but also releases methane, a potent greenhouse gas.

"Here we can go closer and have a look. Here you see, it is melting and falling down... You cannot walk on this grass anymore, the reindeer cannot graze on it. So it's a very obvious example of how the world is changing because of warming," Holmén says.

"We are at the end. There is no land north of us to move to. There is an iconic species like the polar bear, but there are many, many other species that are also struggling because of these changes," Holmén adds.

The transformation isn’t only taking place on the land. Rising water temperatures and reduced sea ice appear to be hitting the Arctic Ocean’s entire food chain. Researchers from the University Centre in Svalbard regularly sample water in Arctic fjords as part of an EU-funded project.

The microbiologists here say they are still unsure as to what is causing large-scale fluctuations in plankton but know it’s affecting the entire region’s marine and coastal ecosystems.

"What I'm looking at are phytoplankton and everything small that you cannot see with your eyes. And since they start the food chain, it goes to fish, goes to seals, goes to polar bears, and up, up, up, all the way there. So if the base itself is changing, then obviously things up are also going to start changing," says Cheshtaa Chitkara, Researcher in Arctic marine biology, at the University Centre in Svalbard.

Scientific collaboration is a key element of the European Union's Arctic policy. That aims to make the region more resilient to climate change and environmental destruction, both by reducing Europe's own global footprint and by supporting international research.

A short flight takes us to Ny-Ålesund - the northernmost human settlement on Earth. The famous departure point for historic polar expeditions, today Ny-Ålesund is a year-round research station and home to 18 scientific institutions from a host of countries.

Isabelle Schulz is the base leader of AWIPEV, the joint research facility of the German Alfred Wegener Institute for Polar and Marine Research (AWI) and the French Polar Institute Paul Émile Victor (IPEV). Its three-person staff run long-term measurements and assist visiting researchers who benefit from EU funding programmes in the Arctic.

"All of what's happening here will actually influence sooner or later your weather in front of your doorstep. The weather balloons, for instance, they provide us data on the atmosphere and about all the different wind masses which will be transported potentially to Europe," Schulz said.

Besides improving weather models, studying the Arctic atmosphere helps scientists understand why the polar region is warming almost three times faster than the rest of the planet.

The AWIPEV Atmosphere Observatory has a full range of sophisticated instruments, like lidars that detect tiny aerosol particles and droplets in the air.

"When the lidar is running and it is dark, you will see a green pulse beaming up in the sky from Ny-Ålesund. So it's literally a highlight in winter times. It looks really impressive and it is important research at the same time," explained Fieke Rader, an AWIPEV Observatory Engineer.

Some of these measurements can shed light on what's been called climate science’s greatest challenge: understanding the role of clouds in a warming climate.

That's the research of Dr Susanne Crewell, Professor of Meteorology at the University of Cologne.

"Ny-Ålesund is a very special place in the Arctic. It's one of the very few measurement sites where we have power, electricity to run our instruments, which we have on the roof, and where we can take really long-term measurements of the inside of clouds," she says.

The High Arctic’s pristine look is largely an illusion: scientists are finding plenty of toxins here brought from all over the world by air and sea currents.

Just a short boat trip away from Ny-Ålesund, the team of Olivier Chastel from France’s National Centre for Scientific Research (CNRS) is studying the impact of industrial pollutants on seabird colonies.

By taking blood samples and other measurements every year, researchers can trace the levels of different compounds. Some chemicals have decreased, like the DDT insecticide that was banned worldwide in 2004, but Chastel says there are new threats.

"We are seeing the rise of new emerging pollutants, such as perfluorates found in non-stick frying pans, some fire-fighting foams, waterproof clothing."

Industrial toxins can affect the development and reproduction of seabirds and other Arctic fauna.

"We also find high levels of contaminants in killer whales, in seals, etc. So yes, that's it — the entire Arctic food chain is contaminated with these pollutants," Chastel adds.

The Arctic is changing before our eyes - an ominous sign perhaps of the imminent future which awaits other parts of our planet that neither we nor the animal world can easily escape.