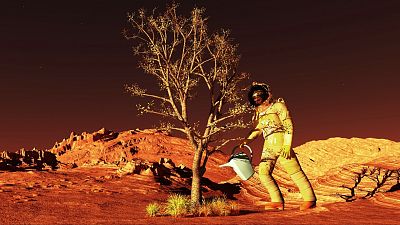 With some predicting that Earth could become unliveable in the future, planets within relatively easy reach could be the answer.

Most planets can not sustain life, mostly because they’re way too hot. Venus, as an example, gets as hot as 471℃ - even metals melt at that temperature. But Mars is another story. The soil is thought to be rich in iron, meaning leafy green vegetables could thrive. And scientists believe there are some moons with atmospheres where water plants may be able to grow.

So instead of shooting billionaires up into space, perhaps we should send our most endangered plants instead to ensure they are preserved and don’t die out.

Which plants are currently endangered?

Nearly 40 per cent of plants could go extinct, according to the State of the World's Plants and Fungi report from Kew Royal Botanic Gardens in the UK. With the climate changing so quickly, they simply aren't able to adapt quickly enough.

The problem is, us humans can’t survive if plants don’t. They give us medicine, food, energy, building materials and clean air. The extinction of just one plant species can have serious consequences for an entire ecosystem.

Corals are one of the few plants which have received a lot of attention over the past few years. Coral reefs, and their ecosystems, are dying because these delicate plants, like the Staghorn Coral, can't recover fast enough from the damage caused by rising sea temperatures In the Caribbean, 98 per cent of staghorn corals have disappeared since the 1980s.

Climate change and the expansion of urban areas pose a big threat to the Vanilla Cribbiana. The vanilla bean is commonly used for flavouring, but it is also used to make medicine. The rise of sea levels and subsequent erosion threatens the Menai Strait Whitebeam too, which can only be found in a small area in North Wales.

The Florida semaphore cactus shares a similar dark future, as its rocky habitat is being destroyed. Hawaiian Sandalwood, a popular ingredient for perfumes and other cosmetics, is rapidly declining due to the rising sea levels caused by climate change. And even plants that have been around for 15 million years don't stand better chances - Chicoria Hueca, a herb that grows in Spain and Portugal, might soon disappear too.

A new report by Bloom & Wild looks into which planets would be suitable to host certain plants.

You might not have heard of some of these planets but start reading up - you never know, they might be your future home.

It’s called the red planet but billions of years ago, Mars's surface was covered with water, and potentially even life. Today, despite its cold desert without many signs of water, scientists believe the planet is one of the most habitable.

Scientists are already studying which plants and vegetables could grow on Martian-like soil. As the soil on Mars has double the amount of iron than soil on planet Earth, leafy green vegetables and microgreens would easily thrive there.

Lettuce, onions, kale, peas and garlic are low-maintenance plants and could potentially grow on Martian soil.

Dandelions are not only very robust, but they have a high nutritional value, which would be handy for any future colonists on Mars.

With Mars' iron-rich soil, Spinach could grow exceptionally well. Potatoes didn't thrive in Mars-like conditions, despite what the film ‘The Martian’ shows. However, sweet potatoes grew well in the experiment.

Europa, or Jupiter II, is the smallest of the four moons orbiting Jupiter and the sixth-largest moon in the Solar System. Life as we know it can't exist on Jupiter. But some of its larger moons are more suitable.

Thanks to its subsurface ocean, Europa might be the most habitable one, according to scientists. Hops vine, trees, shrubs and poison ivy might be able to survive the challenging temperatures on this moon.

Their hard and robust stems would help trees and shrubs to survive the cold and icy months on Europa.

Hops vine needs water every day, so the moon's subsurface ocean could provide the ideal conditions for this plant to thrive.

One of the only things that can kill poison ivy is boiling water - so the cold and wet conditions on Europa seem to be the ideal environment for this plant.

Titan is Saturn’s largest moon. It is the only moon known to have a dense atmosphere, and the only known moon or planet other than Earth on which clear evidence of stable bodies of surface liquid has been found.

It is the only one of 150 known moons that has a substantial atmosphere, so that means rain, clouds, rivers, lakes and seas. This might be just the right conditions for an array of water plants or even rice.

Titan's surface is sculpted by methane and ethane, which only one other planet in the solar system has, Earth. Therefore, tobacco plants should grow on this moon too.

Another thing Earth and Titan have in common is rivers, lakes and seas. Flooded rice needs one month of at least 50 cm deep water, so the conditions on Titan could be ideal for the plant to thrive.

Why are hundreds of sheep forming the shape of a heart in a field?