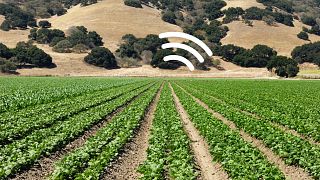 It may sound like something out of a futuristic science fiction film, but scientists have managed to engineer spinach plants which are capable of sending emails.

Through nanotechnology, engineers at the Massachusetts Institute of Technology (MIT) have transformed spinach into sensors capable of detecting explosive materials. These plants are then able to wirelessly relay this information back to the scientists.

When the spinach roots detect the presence of nitroaromatics in groundwater, a compound often found in explosives like landmines, the carbon nanotubes within the plant leaves emit a signal. This signal is then read by an infrared camera, sending an email to the scientists.

What is plant nanobionics and why is it useful?

The experiment is part of a wider field of research which involves engineering electronic components and systems into plants. The technology is known as 'plant nanobionics', and is effectively the process of giving plants new abilities.

“Plants are very good analytical chemists,” explains Professor Michael Strano, who led the research. “They have an extensive root network in the soil, are constantly sampling groundwater, and have a way to self-power the transport of that water up into the leaves.”

“This is a novel demonstration of how we have overcome the plant/human communication barrier,” he adds.

While the purpose of this experiment was to detect explosives, Strano and other scientists believe it could be used to help warn researchers about pollution and other environmental conditions.

Because of the vast amount of data plants absorb from their surroundings, they are ideally situated to monitor ecological changes.

In the early phases of plant nanobionic research, Strano used nanoparticles to make plants into sensors for pollutants. By altering how the plants photosynthesized, he was able to have them detect nitric oxide, a pollutant caused by combustion.

“Plants are very environmentally responsive,” Strano says. “They know that there is going to be a drought long before we do. They can detect small changes in the properties of soil and water potential. If we tap into those chemical signalling pathways, there is a wealth of information to access.”

When it’s not busy emailing researchers, spinach seems to also hold the key to efficiently powering fuel cells too.

Scientists from the American University have found that when spinach is converted into carbon nanosheets, it can function as a catalyst to help make metal-air batteries and fuel cells more efficient.

“This work suggests that sustainable catalysts can be made for an oxygen reduction reaction from natural resources,” explains Professor Shouzhong Zou, who led the paper.

Metal-air batteries are a more energy efficient alternative to lithium-ion batteries, which are commonly found in commercial products like smartphones.

Spinach was specifically chosen because of its abundance of iron and nitrogen, which are important elements in compounds that act as catalysts. The researchers had to wash, juice and grind the spinach into a powder, turning it from its edible form into nanosheets suitable for the process.

“The method we tested can produce highly active, carbon-based catalysts from spinach, which is a renewable biomass," adds Zou. "In fact, we believe it outperforms commercial platinum catalysts in both activity and stability.”