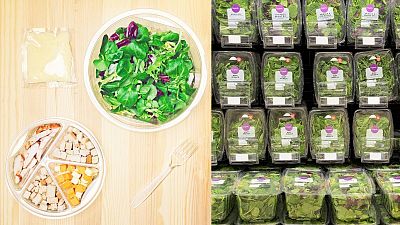 From 2023 Spain has announced a ban on plastic packaging for fruit and vegetables weighing less than 1.5kg. But right now, supermarket shelves are full of fresh groceries packed in plastic.

From bags of apples and polystyrene trays of fruit to salad kits or even just an individual aubergine wrapped in film, plastic packaging has become ubiquitous in Spain's daily shopping.

For many consumers, sealed packaging gives them a feeling that their food is cleaner, fresher and protected and makes the purchase of fresh produce far more convenient. But for some, people's love affair with plastic has gone too far.

The new rules on plastic packaging

Following other European countries such as France, Spain is preparing this new legislation in an attempt to cut some of the two million tons of plastic generated in the country, half of which ends up in landfill.

Effective from 2023, the new law also aims to encourage citizens to buy loose fruit and vegetables in their own reusable containers or other environmentally friendly packets.

Ecologist groups claim that Spain is the second largest plastic polluter in the Mediterranean after Turkey.

Spaniards put nine hundred thousand tons of domestic plastic in their bins in 2020, but only two thirds of that was recycled.

Despite the population's effort to suitably dispose of waste, every year three thousand tons of bottles, wraps and other plastics makes its way into the environment and the oceans, according to data by Greenpeace.

In Spain, domestic produce is responsible for the largest usage of plastic containers in the entire country. Pre-packed food, bottled drinks and cleaning products make up 40% of all plastic packed items that are produced nationally.

“Food manufacturers have adapted their products to accommodate consumers,” explains José Blázquez, PhD professor and Coordinator of Marketing studies at the European University of Madrid.

“Smaller families with smaller portions, lots of people now live alone and also many have a lifestyle where time is very scarce. So the Industry has just reacted to an evolution in the consumer's trends.”

According to a 2019 study by the Spanish Manufacturers and Distributors Association (AECOC) half of Spaniards buy their fruits and vegetables in the supermarket, and only four out of ten choose to buy loose instead of packed products.

Sixty per cent of consumers buy ready-to-eat salads once a week and thirty eight per cent of them purchase packed, peeled and chopped fruits.

In Milagro, in the Northern region of Navarra, Florette's processing plant sits in the middle of extensive fields of lettuce, spinach and other green leafy vegetables.

It was placed here to reduce the environmental impact of transportation and to ensure the freshness of their product. Workers wash, sort, cut and pack thousands of ready-to-eat fruits and greens every day onsite.

Packed vegetables like these are in the centre of Spain's new law aimed at removing superfluous wrappings. Florette, who produces 700,000 salads daily, insists that their products are not only beneficial for the public's diet, but also the environment.

“We've removed one hundred and sixty tons of plastic from our products. All of our packaging is recyclable and all of our salad bowls are now one hundred per cent made out of recycled plastic," says Miriam Saralegui, Florette’s Brand & Business Development Director.

Though their products aren't plastic free, Florette suggests pre-preparing salads and packing them in plastic saves waste in other ways.

Up to twenty per cent of fresh green products are discarded after removing non edible parts like stems, skins, seeds or damaged leaves. By packing only what is suitable for the consumer's plates, domestic food waste is reduced.

Last year Florette sent thirteen thousand tons of non-edible vegetable parts to farms to serve as fodder that otherwise would have been disposed of at home.

According to calculations by the Spanish waste company Envac Iberia, even if all consumers did put their scraps into food waste bins, its transportation to waste processing sites using diesel-powered trucks would add an extra three hundred and eight six tons of carbon dioxide emissions to the atmosphere every year.

Will the ban make it harder to eat healthy?

The new regulations will, of course, have an impact on producers and retailers, but business owners believe customers will suffer too.

They are campaigning for the Government to introduce waivers to guarantee that some of these products, like the pre-prepared salad, will remain on sale.

"We need to consider both the purchasing and eating habits of Spaniards and the benefits for food waste of long-lasting packed products,” Aurelio del Pino, president of the Spanish Association of Supermarkets (ACES) tells Euronews.

As plastics flood the world's oceans and rivers, taking a leap at reducing plastic wrappings in fruits and vegetables seems like a good idea for most consumers but changing habits is easier said than done.

According to a 2019 survey by Ipsos, eight out of ten Spaniards are willing to buy products which use as little packaging as possible.

"If you ask somebody if they would like to use plastic and pollute the planet, of course, they are going to disagree. But when it comes to our individual behaviour, often consumer's put their own needs upfront," explains José Blázquez.

He believes the new legislation may be making citizens face a complex dilemma.

"After achieving a change in the public's consumption habits thanks to these containers, they now eat some fruit instead of a chocolate bar,” Blázquez adds.

“What could happen if, on one hand we forbid consumers from using such products, but on the other hand we continue asking them to have a healthier lifestyle?”

Carolina Domínguez works in an office in Madrid. For months she has been relying on packed salads to eat healthier during her lunch break.

"I don't really have much time in my daily life to cook at home. I’m not a very good cook either," she laughs.

"For lunch at the office we all try to eat fast so we can keep up with work, so normally what I would do is go down to the supermarket and buy anything that's quick, a sandwich or any ready-made food. Now that I found these salads, I eat healthier and it's also very convenient, so I'm quite happy".

"In the end I think that if you can recycle [the packaging] I think it is alright. If you use it to preserve the food it is acceptable, as long as it can be reused," she argues.

Will the ban make a difference?

Environmentalist groups fear the new law will have little impact on plastic waste should these products get taken out of the bill.

"We need to reduce, as much as we can, the use of disposable plastics, and opt firmly for reusable packaging. Recycling can help, but it is not going to solve the huge littering problem we have at the moment, " says Julio Barea, the Head of the Spanish Greenpeace Waste campaign.

“It's all about this fake selling point of convenience: 'buy this packed food and consume it immediately'. This is what creates the problem. And they are going to try to sell us more and more products in these types of containers.”

“That's why we need an ambitious law that will prevent any twists and turns from manufacturers to continue selling disposable containers.”

Watch the video above to learn more about these new rules.