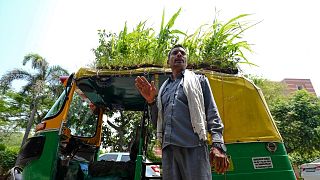 Yellow and green auto rickshaws are ubiquitous on the roads of New Delhi, but Mahendra Kumar's vehicle is anything but ordinary.

In an effort to defy the searing summer heat, he has installed a garden on its rooftop - boasting over 20 different varieties of shrubs, crops and flowers.

Kumar believes the thick patch of greenery prevents heat from entering the vehicle, keeping his passengers cool as they travel around the Indian capital.

"Around two years ago I had this idea during the peak of the summer season,” says the 48-year-old rickshaw driver.

“I thought if I can grow some plants on the roof, it will keep my auto cool and give relief from the heat to my passengers. It's like a natural AC. ”

How hot is the Indian heatwave?

Kumar’s vehicle has become a focal point for locals stopping to take photos of the ‘moving garden’.

The driver has also installed two fans inside the rickshaw in an effort to defy the deadly heatwave sweeping across the nation. Temperatures in New Delhi have exceeded 45 degrees Celsius in recent weeks, while March saw India’s highest average maximum temperature in 122 years.

Heatwaves have killed over 6,500 people in India since 2010. Scientists say climate change is making them harsher and more frequent across South Asia.

Forecasters predict temperatures will abate in the next three or four days, but they warn it could rise again in the weeks to come.

Pleasing to the eyes and the soul

For now, Kumar is pleased to be doing his "own small bit" for the environment by planting lettuce, tomatoes and millets on his auto rickshaw.

The driver uses a thick sack as the base of his garden, before sprinkling soil onto the roof and sowing a variety of seeds.

"It does not require much effort at all,” says Kumar. “I just water the plants using a bottle twice a day.”

His initiative has captured the attention of many of his fellow drivers, as well as locals eager to see more greenery added to their sweltering city.

"It's a great idea," says Naima Jamal, a pedestrian watching from the side of the road.

"Delhi has become a concrete jungle, there is hardly any vegetation. We need more auto rickshaws like this on the roads - they are pleasing to the eyes and the soul."

Watch the video above to see the moving garden for yourself.