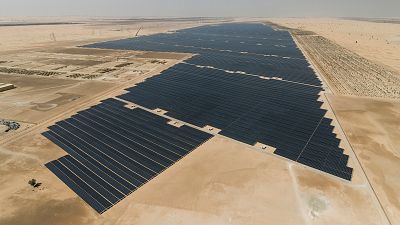 The Al Dhafra project in Abu Dhabi is set to be the largest solar plant in the world, with the capacity to power approximately 160,000 households across the UAE with electricity. Now, Abu Dhabi Power Corporation (ADPower) has announced that not only will the project break records for its size, it will also provide the cheapest tariff for solar power anywhere in the globe.

The project is still in its planning stage but, once operational, it will generate 2 GW of power, reducing the UAE’s CO2 emissions by more than 3.6 million metric tons per year. That’s the equivalent to removing around 720,000 cars from the roads.

Currently, the world’s largest solar plant is the 1.2 GW Noor Abu Dhabi project, which began operation in April 2019. The new Al Dhafra project will almost double the size of this existing site. More importantly, the new plant has received the most cost-competitive tariff for solar PV energy ever recorded. The new tariff will be around 44 per cent lower than the one approved three years ago at Noor Abu Dhabi.

Bids to help finance the solar plant came in their droves once the project was announced. In July 2019, Emirates Water and Electricity Company (EWEC) received 48 expressions of interest from potential bidders. Five were confirmed and more information will be released over the coming months, with the projected launch date predicted to be in the latter half of the year 2022.

“The cost-competitiveness of the bids received is truly remarkable – positioning Abu Dhabi as one of the world’s most attractive markets for solar energy development and reinforcing the economic benefits now achievable through renewable technologies,” he said.

Jasim Husain Thabet, Chief Executive Officer and Managing Director of ADPower, called it a “landmark project” and confirmed that “the water and electricity sector intends to play a critical role in meeting the target of having 50% of Abu Dhabi’s energy needs served from renewable and clean energy sources by 2030.”

In the past, the UAE has been criticised for having one of the largest ecological footprints of any country. Dubai was even named the "world's most improbable green city" by National Geographic. But despite the scepticism, the UAE capital Abu Dhabi has come a long way. Abu Dhabi sustainability week was initiated in January 2019, which the launch of the city's #WeAreCommitted campaign.

"We encourage millennials worldwide to take a leaf out of the UAE’s book and learn how to lead a more sustainable life," Dr Thani Al Zeyoudi, Minister of Climate Change and Environment, told The National.