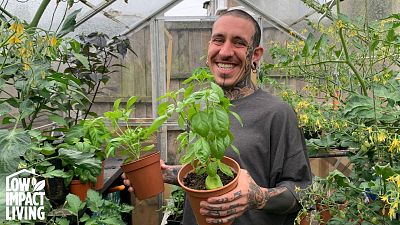 In each episode, you’ll be meeting ordinary people all over the world who are living in innovative, sustainable ways.

When Alessandro Vitale moved from a small town near Venice, Italy to a small flat in London seven years ago, he found himself missing a connection with nature. This urge to get reacquainted with the natural world set him on an incredible journey, eventually building an urban oasis in his own backyard.

“I wanted to create my own area in an urban space,” Alessandro explains, “so that every time I get there, I feel like I’m submerged in nature - like I’m disconnecting from the reality, from the grey London, and I’m immersed completely.”

Away from his day job as a tattoo artist, Alessandro has built a successful YouTube channel and launched his own line of chilli seeds - all while maintaining his extraordinary garden.

On social media, Alessandro is known as Spicy Moustache, a nickname given to him by his partner. “My girlfriend complained that every time she tried to kiss me there was chilli in my moustache, so she started to call me Spicy Moustache - and this all developed into a sort of branding for me,” he says.

The pair first hit the headlines late last year, after Alessandro was able to grow enough food to mostly sustain them for several months. He clarifies that he still had to go to the supermarket for some things, but almost all of their fruit and vegetables were grown in his yard in Walthamstow, north-east London.

Where do you start with creating an urban garden?

What’s perhaps most fascinating about Alessandro is that he started as a novice, inspired by what his grandfather had taught him as a child.

“I started on a balcony, so I didn't have much space but I started growing things in pots,” he says. Beginning with a few chilli seeds, Alessandro quickly realised he not only had a passion for growing his own food - but also the skills. However, it’s hard to grow huge amounts on a London balcony.

“At some point, I kind of felt the need to move into a bigger house with an open space outside,” he explains, “since then I'm kind of addicted to having an outdoor space.”

His dream for Spicy Moustache, on Instagram and YouTube, is to show people how accessible gardening and growing your own food can be. Not everyone needs to have an elaborate greenhouse or hectares of land - it’s possible to start with just a single pot on a windowsill.

Watch the video above to find out more about Alessandro’s low-impact lifestyle.

How did Singapore become a biophilic city?

How do you make cities healthier, cleaner and cooler?