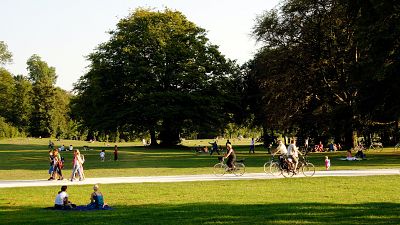 If I asked you - pre-pandemic - to think about public health, your mind would likely go towards flu jab initiatives, healthy eating campaigns, and posters warning us of the dangers of smoking. You probably wouldn’t think about urban planning - but if we want to truly combat one of the worst health crises on our hands, it should be a public health concern.

Inactivity is currently the world’s fourth leading cause of death. It's a problem often confused and conflated with laziness and personal choice, but in reality the issue is geographic, systemic, and woven into the structure of modern living.

In short: if we want to fix our increasingly sedentary world, we have to redesign it.

Political correspondent and cycling enthusiast Peter Walker dedicates a chapter of his new book to this exact issue. The Miracle Pill: Why a sedentary world is getting it all wrong is an eye-opening read, addressing our global inactivity problem and suggesting solutions for readers.

The more I read, the itchier I became to leave my sofa and get moving. After a couple of chapters, I ended up downloading the audiobook version so I could pace around my neighbourhood while listening to the seemingly endless bleak figures about the scale of our inactivity problem.

Currently, 1.5 billion people around the world are so inactive they are risking their long-term physical health. Every year an estimated 5.3 million people die from causes related to inactive living - roughly the population of Norway. An extraordinary 80 per cent of British children move so little that they face a future with poorly developed cardiovascular systems, weak bones and chronic illness.

These are just three of many statistics Walker presents and explores in his book. But far from being a guilt-inducing read, making a reader feel ashamed of their desk job or reliance on their car, Walker manages to instil a relentless sense of hope throughout.

During the book it is repeatedly made clear that patterns can be reversed, health can be improved, and it’s never too late to start moving.

Most importantly, however, Walker never assigns blame for this public health crisis to individuals. We haven’t all become collectively lazy on a catastrophic, global scale: the problem is far bigger and more structural than any one person’s choice to swap exercise for Netflix.

How is urban planning linked to inactivity?

Solving this sedentary crisis requires, in part, a rethink in how we design our towns and cities.

“We’ve designed the world such that in many, many places driving is more or less the only thing you can do,” Walker tells me.

But if we could all harness the power of activity, our lives could be dramatically altered.

The book’s name - The Miracle Pill - relates to a study in Denmark that tracked 30,000 randomly selected people over the course of 15 years. After adjusting for all other factors, the people who cycled to and from work (an average commute of just 15 minutes across the group) were 40 per cent less likely to have died during the research period.

“It’s this sort of statistic which helps you understand why some experts can go a bit misty-eyed when they talk about activity,” Walker writes in the book, “it’s also why so many of them compare everyday movement to the miracle-giving pill.”

He argues that were a team of scientists to discover a drug with the same life-enhancing effects, “a Nobel Prize would be more or less guaranteed.” Yet despite the obvious health benefits for people and planet, no such prescription for mass movement has been given.

Throughout the book, the experts Walker talks with repeatedly explain that the decline in global activity levels is because we have systematically removed the need for ‘incidental movement’ from our lives. Incidental movement is the activity that happens naturally throughout our day. Not purposeful exercise, but things like walking to the shops or cycling to work.

As more of us work from behind desks, drive to supermarkets, and - especially at the moment - no longer even have a commute, it’s increasingly easy to be inactive for the majority of your day.

Interestingly, though, activity levels tend to be better in cities.

“There’s more people who will even just walk 10 minutes to get a bus or train, rather than just get into their car and drive straight to where they need to go,” explains Walker.

“So my exhortations for people to cycle and walk more are great if you live in the city, or even in a town, but if you live in a kind of small village and your nearest shop is a mile or two away and there’s not even a pavement to get there - then often the only safe option is to drive.”

He uses the cycling-loving Netherlands as an example. “The Dutch are obviously very well known for having bike paths in urban areas, but in lots of rural areas, too, they will have a kind of separated footway and bike lane.

“The interesting case study for this is all these low traffic neighbourhoods (LTNs), which are being introduced partly in London, and lots of other cities, to make it easier for people to cycle or walk.”

For change like this to happen, Walker adds, it’s up to our governments.

“We need central government to get involved. It's too big for it to be left to individual local councils.”

Getting politicians to take notice, however, is a different matter entirely.

“I once asked the head of the Dutch cyclists’ union what she would do if she was in Britain to get more flexibility. She said ‘well I’d start 30 or 40 years earlier than you are now!’ And that’s almost the most difficult thing, because no one wants to be at that starting point.”

The pandemic may have helped shift perspectives

Almost a year ago, as much of Europe entered our first wave of national lockdowns, there were reports from across the continent of nature and wildlife ‘recovering’. In the UK, for the first time since the Second World War, daily exercise was mandated to the nation as we were each allowed an hour outside our homes to move.

When I speak with Walker he reflects on how people reacted to these early weeks of lockdown.

“A lot of people who live in urban areas had this period where they suddenly thought ‘oh my goodness, the sky’s really blue, the smog and smoke has gone, the air feels clean’ - and a lot of people really like that. And they liked the fact that they could cycle around their local streets, there was no traffic on the roads.”

A year into the pandemic, many people “will be quite desperate to get back to the office” he caveats, but there has undoubtedly been a widespread desire for improved air quality, less traffic, and greater connections with green space.

Pre-COVID, the idea of governments (especially in the UK) intervening in public health as dramatically as we’ve seen over the last year would have been unimaginable. But Walker feels this same kind of approach is needed when it comes to inactivity.

“We’ve had a period now where entire economies have been more or less closed down for a year to save a lot of lives. But arguably inactivity over two, three, or four years will kill more people than COVID has.

“There is this idea that perhaps the bar for what the public will accept in terms of health interventions has been raised.”

When will the ‘Miracle Pill’ power of activity be realised?

Though the Netherlands is a pioneer when it comes to urban design that encourages movement, figures in the EU are still dismal. Two-thirds of the adult population don’t reach the minimum activity levels needed to be healthy.

However, Walker says, a revolution could be just around the corner. Though it’s clear we needed to start decades ago, “things could change very, very quickly.”

He uses an analogy from his first book, How Cycling Can Change the World, about how bikes were the dominant presence on the roads in 1890s Britain.

“There was this long debate about whether the motoring movement should be allowed to join,” explains Walker.

“It was seen as this kind of innovation, this novelty - these strange people who drove cars with a man in front waving a flag. But within 20 years the cyclists had virtually gone. The cars had taken over - and nobody expected it.

“So these revolutions come, and they’re not necessarily the one that you were waiting for. But, you know, things can change very, very quickly.”