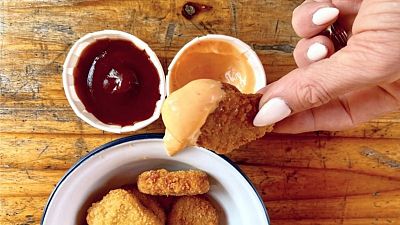 A new fake-meat is on the menu as Impossible Foods launches in the UK for the first time.

The launch of Impossible “Chicken” Nuggets and Impossible Sausage Patties represent the brand’s first foray into the European market, after successfully moving into New Zealand, Australia, and the United Arab Emirates in the last year.

Both products will be available from 19 Mayat restaurants across the country, offering Brits a plant-based chicken nugget that the brand claims tastes better than the animal version. The owners say they are hoping to cash in on the UK’s “unique and unrivalled” chicken shop culture.

“We’re confident our nuggets will compete…because first and foremost they taste better, and they’re also better for you and better for the planet,” said Impossible Foods CEO Peter McGuinness.

Later this year products will be rolled out in supermarkets as well as in 250 Hungry Horse pubs, owned by the UK’s biggest pub owner and brewer, Greene King.

Is plant-based meat better for the planet?

Plant-based options are more popular than ever, and Impossible’s announcement follows a trial month in which Burger King in Leicester Square, London served only vegan food.

Meanwhile SMART PROTEIN, an EU-funded project found that between 2013 and 2020 the plant-based food industry grew by 49 per cent.

An Impossible Food study found that chicken is the most commonly consumed meat per capita in the UK, with three-quarters of UK consumers reporting that they eat animal-based chicken on a weekly basis, and nearly 90 per cent saying they eat it on a monthly basis.

Carbon emissions from meat agriculture are double that of the entire US according to researchers at the University of Illinois. Chicken farming meanwhile has been associated with toxic algal blooms in the UK.

Impossible “Chicken” Nuggets first launched in the US late last year, and quickly became the fastest-growing brand of plant-based chicken nuggets in the category.

A version of the company’s plant-based Impossible Sausage patty was launched in 2020 at Starbucks locations in the US.