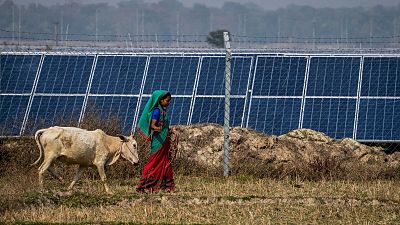 The third instalment of the Intergovernmental Panel on Climate Change (IPCC) report has been published today, this time with a focus on mitigation.

It’s a dense document and a heavy read - as you might expect from the UN body responsible for assessing the science related to climate change - but it’s also an absolutely vital milestone.

The first IPCC report looked at what has caused climate change, the second looked at the severity of the situation, and today’s is all about how we can fix it.

We absolutely don’t expect you to read all 3,000 pages of the report, so we’ve collated the most important things you need to know.

This shouldn’t come as news to anyone, but it always bears repeating.

The next few years are genuinely critical for the future of humanity. In order to limit global warming to 1.5°C, in line with the Paris Agreement, global greenhouse gas emissions must peak no later than 2025.

These emissions then need to be reduced by 43 per cent by the end of 2030.

2. We’re not on track right now

At the moment the planet is set to get warmer by 3.2°C

Currently, with all the climate pledges made, emissions are still set to increase by 14 per cent. This is a world away from the 43 per cent decrease we need to see by the end of the decade.

In order to start moving in the right direction…

3. Governments must move away from fossil fuels

The IPCC report makes it clear that we need to move away from fossil fuels in order to reach our emission reduction targets.

There needs to be “widespread electrification, improved energy efficiency, and use of alternative fuels.”

There’s good news on this front though, as the paper notes that since 2010 there have been “sustained decreases of up to 85 per cent in the costs” of renewable sources.

But the authors also emphasise that we can’t solely focus on energy, as…

4. Action needs to come from every industry

This is a repeated message throughout the IPCC report: there needs to be truly substantial action taken in all sectors.

From travel to finance, agriculture to construction - every industry needs to be placing net-zero strategies at the heart of its operations.

And these changes are likely to have benefits far beyond just climate change mitigation.

Interestingly, the paper highlights that the kind of action needed to cut emissions is also likely to improve public health in a broader sense.

It points to things like liveable cities as an example of where changes that help reduce emissions, also help improve people’s wellbeing.

A move to net-zero, particularly on a global scale, is often accused of being too costly by critics. However, the IPCC report highlights that…

A report last year from leading economists concluded that the cost of climate inaction will be far greater than a net-zero transition. That notion is supported by today’s report too.

Even without taking into account the financial benefits of avoiding total climate disaster, the suggested actions we need to take to reach net-zero quickly enough would only reduce GDP by a few percentage points by 2050.

This leads to the most important point of all…

There is undoubtedly an urgent need for action. It’s abundantly clear that we are far from where we need to be - but today’s IPCC report plainly states that limiting global warming to 1.5°C is not beyond reach.

It will take a united effort from global leaders, encouraged (and perhaps forced) into action by individuals voicing their concern, in order to reach these goals. There also needs to be collaboration from all sectors, with technological innovation at the forefront.

But it is absolutely not too late to stop the worst of the climate crisis.

Could we hit 1.5°C of global warming in the next five years?

‘Retreating into shadows’: How the climate crisis is impacting cricket