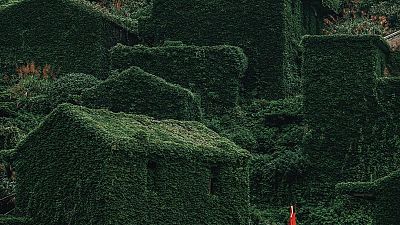 Mother Nature has a remarkable knack for cleaning up after humans. For centuries, all over the world, she has been working her magic, transforming decrepit man-made structures into something naturally beautiful. So beautiful, in fact, that urban explorers flock from far and wide to experience these hidden gems.

It’s no wonder; when nature takes back control over urban areas, breathtaking scenes are created. There’s something so serene about the way vines weave into the cracks of old brickwork, and trees nestle themselves into the gaps where windows once were.

Over the past few weeks, we’ve been keeping an eye out for these special, sometimes secret locations where nature has reclaimed built structures that have fallen into disrepair. From an abandoned swimming pool turned urban jungle, to a dilapidated church carpeted with green, these are some of the most spectacular spots that nature has taken over.

Nature takes over this chapel in the South of France

It’s a bit of a mystery why the 19th century Chapelle de l'Ange au Violon was abandoned decades ago, and nature has added to the allure by giving the crumbling church a green facelift.

Situated in the South of France, a carpet of foliage lines the old chapel’s tiles while the sunlight streams through what remains of the stained glass windows.

Nature takes over the abandoned village of Houtouwan

We’re heading East for our next reclaimed destination, to Shengshan village on an Island just East of Shanghai.

When residents of the remote village moved away in the 1990s due to difficulties accessing proper education and food, it didn’t take long for emerald green vegetation to engulf the entire island.

It’s magical how nature creates more opportunities to thrive off the back of catastrophe. The SS City of Adelaide wreck caught fire and ran aground on the shores just off Australia’s Magnetic Island in 1912.

Nature takes over this abandoned building but adds a rooftop pool

It’s not just the sea that nature takes to the water for. Atop an abandoned industrial building, a natural pool has formed in the most, well, unnatural of places.

Although this skyscraper was once a hive of human activity, very few people are brave enough to swim in this rather unique rooftop infinity pool. Fancy a sky high dip?

Nature takes over this cabin in Norway

The builders of this Norwegian cabin probably didn’t intend for its residents to be birds. But that’s exactly who lives there now that trees have taken root on its roof.

Though it may be scandi-chic to have a green roof for insulation (and all round architectural fashion), when they’re not maintained, the power of nature wins.

Once home to splashing children and front crawlers in goggles, this Italian swimming pool is no longer visited by punters in their cozzies.

After more than 40 years of disrepair, the pool has swapped its former blue waters for an oasis of green, and now looks more like a conservatory than a swimming spot.

Nagasaki residents have nicknamed the once coal rich Hashima ‘Battleship Island’, due to its distinctive boat-like shape.

After more than five thousand residents abandoned the island when the coal ran out in 1959, it resembled a floating concrete jungle. Over 60 years on, the site looks more like a real jungle, with trees sprouting from the deserted metropolis.

What’s more enchanting than an abandoned castle? One that’s overrun by trees and foliage from its surrounding forest of course.

This might look like the setting for a fairytale movie, but it was actually the location of last year’s UK season of I'm a Celebrity...Get Me Out of Here!.

This Alaskan naval airbase was closed in 1997, despite being a key launch point in World War II. In the 24 years since, nature has taken on an interior design role, adding some soft (mossy) furnishings to the floors and walls.

These are in keeping with the island’s vegetation, which is mostly tundra including grasses, mosses and low-lying flowering plants.

Do you have £60 to spare and fancy moving into a derelict sea fort off the Welsh Pembrokeshire coast?

These wild and remote digs aren’t most peoples' style, but someone did buy the private island in 1932 for that bargain price, but it seems it wasn’t as habitable as they were hoping. Since the sale, the isolated monolith has been empty, allowing nature to do its thing and adorn its roof with a blanket of greenery.

Sitting pretty, at a massive 200 metres tall, the ancient fortress city of Sigiriya has been the site of Sri Lanka’s capital and a Buddhist monastery over its lifetime.

Now the abandoned rock city stands sentinel, filled with grasses and a natural pool, watching over the island nation.

Although very little worship takes place these days in the church in Znamenskoye-Sadki, its orthodox murals still line the walls amidst the crumbling ruins.

The church is part of one of the oldest country estates of Moscow, and you can find it in the South West of the city, but it fell to ruin in 1929. While the Trubetskoy family who once owned the estate never returned, nature was quick to take their place and add her own natural decor to the church.