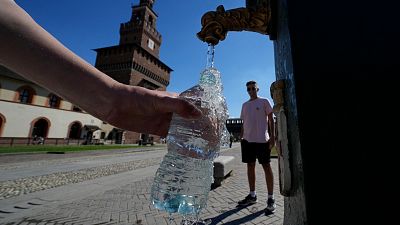 Italy's worst drought in 70 years has led to the country declaring a state of emergency in five northern regions.

Several municipalities have already announced water rationing, including the popular cities of Verona and Pisa.

The drought is a result of a severe heatwave that is taking its toll on the country, combined with around 50 per cent less rain than this time last year.

This is also causing wildfires at a rate of three times the average. So far in 2022, at least one fire has been registered every two days, according to Coldiretti, Italy's national confederation of farmers.

There have been other devastating impacts from the extreme heat too. On Monday, a section of the Marmolada glacier in the Italian Alps collapsed killing at least seven people.

After four months with barely any rainfall, northern Italy is battling its worst drought since 1952. The Po River, the longest in Italy, has hit record low water levels.

Spiking temperatures and a lack of snow in the mountains that normally feed the river are exacerbating the situation.

Stretching from the Alps in the northwest to the Adriatic Sea on the east coast, the vast waterway is a vital source of water for several regions. It is used for drinking water, irrigating crops and producing hydroelectric power across northern Italy.

Other rivers are also drying up. The Arno, which flows through Florence and provides tap water, and the Tiber, running through Rome, both had water levels half of what is normal for June. Lakes Maggiore and Garda have also been hit by lower than normal water levels for this time of year.

Where has Italy imposed emergency measures?

Five regions in northern Italy have declared a state of emergency. Emilia-Romagna, Fruili Venezia Guilia, Lombardy, Piedmont and Veneto have been given €36.5 million in emergency funds to tackle water shortages.

The state of emergency provides these regions with "extraordinary means and powers" to ensure public safety, such as the introduction of water rationing.

More than 100 towns in the Po valley have already been asked to ration water overnight during the drought too.

Rome is in a "state of calamity"

There are also growing concerns about hydroelectric plants, which have generated some 40 to 50 per cent less power over the past few months. One plant in Piacenza in the Emilia Romagna region has already been forced to temporarily shut down its turbines because of the low river water levels.

In Lazio, the region around Rome, the regional governmen independently declared a “state of calamity” in June.

This has seen water restrictions imposed in several municipalities around Lake Bracciano, 32 km northwest of Rome. The measures have banned the use of water for washing cars, watering gardens and cleaning external patio areas.

In the capital, the city’s water board is lowering the pressure in the pipes so that the water supply is reduced without having to be suspended.

There are currently no restrictions on visiting Italy as a result of the drought. However, travellers should look out for emergency measures such as water rationing.

In Verona and Pisa, drinking water can't be used for filling swimming pools, watering vegetable patches, gardens and sports fields, for washing cars, or for any activity not strictly necessary for human needs. Rationing will remain in place until 31 August and people found to be breaking the restrictions could be fined up to €500.

In Villorba, a municipality in the Veneto region, residents are not allowed to water gardens, wash cars or fill swimming pools between 6am and 11pm. The ban is in place until 30th September.

Some local councils are considering a restriction on water use for fountains and water parks. In Milan, decorative public fountains have been turned off and water sprinklers limited. Similar measures have been introduced under the state of emergency in the neighbouring municipalities of Emilia Romagna and Piemonte.

Italy’s association of amusement parks has suggested using filtered seawater at attractions near the coast. Other parks may be forced to close.

Rome’s emergency measures may see public drinking fountains turned off, as occurred during a drought in 2017. A knock-on effect of this could be more people buying single-use plastic bottles, used for minutes before taking hundreds of years to decompose.

How long will Italy’s drought last?

The drought currently shows little sign of easing, just as Italy's buiest summer season kicks off. The summer is forecast to be hot with scant rainfall. The water level of the Po River is continuing to drop.

Restrictions introduced in the coming weeks are likely to remain in place until the end of summer.

Europe is facing one of its toughest years for extreme weather