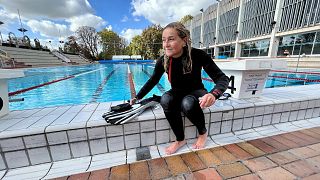 With the price of gas soaring, swimming pools across France are turning down the heat.

One suburban Paris outdoor pool has turned off the heating altogether and made wetsuits compulsory for swimmers.

Before Russia's war on Ukraine sent gas prices soaring, the Olympic-size open-air pool in Nogent-sur-Marne was warmed to a comfortable 26°C. Now, the temperature hovers around a chilly 19°C.

Many bathers had already taken to using wetsuits. But from October, the pool made them compulsory, to prevent medical emergencies among people not used to swimming in cold water.

Why are swimming pools in France turning off the heat?

Nogent Nautique pool manager Adrien Nougot says the centre had decided to stop heating the 50-metre outdoor pool on 15 May for financial reasons.

The French government this week announced plans to cut energy consumption by 10 per cent over the next two years, compared to 2019 levels.

In Nogent, lifeguard Guy Dalpayrat said the centre would try to keep the pool open as long as possible, probably until the temperature drops below 15°C.

A poolside sign showed the outdoor pool temperature was 19°C, compared to 28 °C in the indoor 25-metre pool.

Swimmers can still practice their favourite sport. I think that is a good solution.

On a crisp and sunny autumn day, 63-year-old swimmer Muriel Goldberg said she did not mind the wetsuit at all.

"It's pure happiness. Honestly, the wetsuit is a great experience. I had never worn one before, I thought it would have an impact on movement but not at all. On the contrary, it's nice and fresh, we feel much better after training in a wetsuit in cold water than when it's heated," she says.

A few diehards were doing laps in wetsuits and nobody complained. Better a cold pool than a closed pool, says Nicolas Lioret, 48.

"Swimmers can still practice their favourite sport. I think that is a good solution," he says.