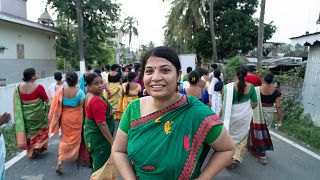 Dr Purnima Devi Barman set about trying to make the impact of people on the birds positive rather than negative.   -  Copyright  © UNEP / Diego Rotmistrovksy
By Jeremy Robson  •  Updated: 29/11/2022

“One day I had a life changing encounter, I saw a man cutting down a huge nesting tree for Hargila birds. This is the largest nesting colony of these birds in the world. And from that day my mission started, I wanted to save the species from extinction.”

Wildlife biologist Dr Purnima Devi Barman had a clear mission but it wouldn’t be easy. Hargila storks are much maligned in the Indian state of Assam.

They scavenge on carcasses and bring the bones, and sometimes dead animals, to their nesting trees, many of which grow in people’s gardens, and leave behind foul-smelling droppings.

Consequently, they are listed as an endangered species, with their habitats at risk from humans.

So Dr Barman set about trying to make the impact of people on the birds positive rather than negative.

“Restoration is so important to save our biodiversity, and to save ourselves. But ecological restoration we have to do by community participation” Says Dr Barman.

What is the Hargila Army?

The Hargila Army is a group of women led by Dr Barman who aim to make an impact on their local communities and environments.

They connect their communities with their surrounding ecosystems, and especially Hargila birds, through community activities, workshops, and fundraisers.

Today the Hargila Army has more than 10,000 members. They protect nesting sites, rehabilitate injured storks which have fallen from their nests and arrange baby showers to celebrate the arrival of newborn chicks.

Dr Barman has also empowered women by providing them with yarn and weaving looms. They use these to create and sell textiles featuring art and motifs of the Hargila Birds.

Since Barman started her conservation programme, the number of nests in the villages of Dadara, Pachariya, and Singimari in Kamrup District has risen from 28 to more than 250, making this the largest breeding colony of Hargila birds in the world.

Why did Hargila birds need protection?

The animals stand about 1.5 metres tall with wingspans of up to 2.4 metres and villagers often would rather cut down trees in their backyards than allow the storks to nest in them.

“The bird was totally misunderstood. They were treated as a bad omen, bad luck or a disease carrier,” says Dr Barman, who was herself mocked for attempting to save nesting colonies.

A large part of Dr Barman’s work has been focused on changing people’s hearts and minds, and their automatic cultural negativity against these birds.

“Being a woman working in conservation in a male-dominated society is challenging but the Hargila Army has shown how women can make a difference,” she says.

Dr Barman was made UNEPChampion of The Earth

In recognition of her work, Dr Barman is one of the United Nations Environment Programme’s 2022 Champions of The Earth.

This is an award which encourages ordinary citizens to make an impact on the environment. The seven most outstanding individuals are then recognised as Champions of The Earth.

Dr Barman says one of her biggest rewards has been the sense of pride that has been instilled in the Hargila Army and she hopes their success will inspire the next generation of conservationists to pursue their dreams.