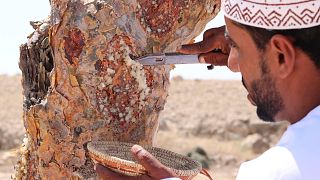 Mention frankincense, and it’s hard not to instantaneously think of Christmas.

Cited in the story of the birth of Christ in the Bible’s Book of Matthew, it was one of the precious gifts (alongside gold and myrrh) given to the baby Jesus by the three wise men.

But there’s more to this ancient, aromatic tree resin than its Biblical association. This becomes immediately clear on my first trip to the Sultanate of Oman, the epicentre of frankincense.

Exploring Salalah: The land of frankincense

The mystical, rich scent of frankincense (known locally as luban) is unavoidable in Oman. This is especially true in the city of Salalah in the southernmost governorate of Dhofar, where frankincense trees grow wild.

Before I even land in the sun-blasted seaside city, I get my first whiff. An undernote of frankincense can be detected in the hand lotion on Oman Air, where amenity kits come care of Oman’s most famous perfumery, the high-end Omani heritage brand Amouage, which uses frankincense in around 60 per cent of its products. From that moment on, the scent of frankincense is never far from me.

As I swan through the ultra-modern, sleek Salalah Airport, frankincense hydrosol wafts from industrial-grade diffusers to scent and clean the air.

When my taxi pulls up under the elegant Arabian arches of my hotel, Al Baleed Resort Salalah by Anantara, I spy a trio of ornamental frankincense trees in gleaming gold pots. The property lounges seaside, within viewing distance of The Museum of the Frankincense Land.

My room is like a magical setting from a Scheherazade story with frangipani trees, bronze lanterns, and traditional majlis seating. The air is fragrant with the faint, slightly sweet traces of incense smoke from recently burned resin.

And at the gleaming spa, with its lavish marble hammam, frankincense essential oil is worked into sore muscles, and frankincense-infused elixirs are offered in lieu of herbal tea.

Even after just a few hours in Salalah, it’s immediately apparent why this is known as the land of frankincense.

Also called the perfume capital of Arabia, Salalah is home to the most valued species of frankincense trees in the world, Boswellia sacra, from which sap is sourced and dried to become little crystals of frankincense resin - once worth more than gold. The resin is burned as incense or distilled into oil for various uses. Though also native to Yemen and Somalia, this top species is most commonly found in Oman and played a major role in establishing the region as a prosperous trade hub in the ancient world.

Hussain Balhaf, the in-house tour guide at Al Baleed Resort, takes me to see the UNESCO heritage site of Khor Rori (Sumhuram), a fortified port city once used for the frankincense trade, dating back to the 3rd century BCE.

“During excavation, incense burners were found with frankincense still on them,” says Hussain as we walk quickly through the crumbling, biscuit-hued ruins to avoid the heat.

Later, when we visit the Frankincense Museum, Hussain points out several of these burners, which were excavated from homes in Sumhuram, as well as in religious areas - something that still occurs today. Frankincense is still burned in mosques, churches, and temples all over the world, its smoke symbolic of sanctification and purification.

Next, Hussain takes me to Wadi Dawkah, another UNESCO-sanctioned site of stony, semi-desert, which is a natural habitat for frankincense trees.

“Seventy years ago, this wadi [valley] would have been filled with frankincense trees,” says Hussain, citing climate change and overharvesting as causes for the decline. He shows me how in harvest months, the bark is scored so that a sap emerges. This sap is then scraped away so a second sap forms, which later dries and crystallises.

In previous counts, there were only 1,200 ancient perennial trees in Wadi Dawkah. To increase numbers and protect Oman’s heritage, the government has planted a frankincense farm and developed a visitors’ centre on the site, run in partnership with Amouage. As custodian of the trees, the brand ensures harvesting is sustainable and regulated.

Learning about frankincense harvesting with a local guide

Harvesting frankincense is a time-consuming process that is done by hand and cannot be rushed. Even after harvest, the work still isn’t done. To learn more about how frankincense is processed and sold, I enlist the help of Adnan Safrar, an expert local guide from ToursByLocals, to take me to a workshop.

“We’re very lucky to get to visit,” Adnan says, as we turn down a quiet street in the industrial area of Salalah. “Most workshops are very protective of the process.”

Despite this warning, Amer Mohammed Alameri, general director of Luban Dhofar, a frankincense distillation company based in Salalah, couldn’t be more welcoming. He ushers me into his workshop, pointing out the stainless-steel tanks, vats of ice-cold purified water, and finished products - soap, powder, hydrosol, and essential oil for cosmetics, fragrances and natural remedies.

Amer’s family has worked with frankincense for generations, and he is generous with his time and treasures.

“Our policy is to make known all the benefits of frankincense to the world. For thousands of years, we’ve known this. Now, there is research being done to prove it,” says Amer, showing me studies done by Omani universities on the promising effects of frankincense on infections and diseases.

What is frankincense used for in Oman?

While the medical benefits of frankincense are still being studied and shared around the world, in Omani society the product remains a cherished resource - used to purify, scent and flavour.

Back in the relaxing, sprawling grounds of Al Baleed Resort, I sit under umbrellas of palm trees with Dina Macki, an Omani chef born and raised in the UK.

“We’ve always said that frankincense is an elixir of life,” she says. “It’s actually just a really good thing to have for medicinal purposes. We put the edible resin in water, and when I first started drinking it, I noticed that my digestion was better, and my skin cleared up…It’s also really common to burn frankincense and stand over [the smoke] in dresses to let the frankincense come up through us for purifying purposes and for the smell,” continues Dina.

Of the four varieties, top-grade hojari frankincense is used in cooking. Dina is in Salalah to cook at Al Baleed Resort’s Food Festival, a week-long culinary extravaganza in its second year. Every night, a new chef from a different country delights guests with dishes reflecting their hometown restaurants (most of which are Michelin-starred).

For her night, Dina dishes up Omani specialities at the hotel’s poolside Sakalan restaurant, including a dessert topped with edible frankincense pearls. “I personally love [the taste of] frankincense; it works really well with sweet things, like when you infuse it in crème brûlée and panna cotta,” says Dina.

The smoke can also be used to flavour meat and fish, while milk flavoured with frankincense can be found in Oman’s grocery stores. For a newer twist on the ancient product, you can even find frankincense ice cream. I recommend you enjoy the icy treat on one of Oman’s countless postcard-perfect beaches - because frankincense isn’t the only spectacular natural wonder in this part of the world.

Nicole Trilivas was a guest of Al Baleed Resort Salalah by Anantara and Experience Oman with support from Oman Air and ToursByLocals.