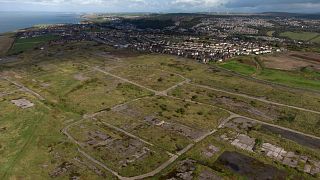 An aerial view of the the site of a proposed new coal mine near the Cumbrian town of Whitehaven.   -   Copyright  AP Photo/Jon Super
By Rosie Frost  •  Updated: 08/12/2022

The first new UK coal mine in 30 years has just been approved despite concerns from politicians and experts.

‘Levelling Up’ secretary Micheal Gove gave the project at Whitehaven in Cumbria the green light on Wednesday (7 December).

The £165 million (€191 million) investment is expected to create 500 new jobs and produce 2.6 million tonnes of coking coal a year. This kind of fuel is primarily used for steel making, not energy production.

An estimated 400,000 tonnes of greenhouse gas emissions - the equivalent of putting 200,000 cars on the road - will also be produced by the mine.

The UK government insists this is still within the climate legislation that requires the country to reach net zero by 2050 as operations will be shut down by 2049.

How have experts and environmentalists reacted to the new coal mine?

But many believe the new mine is a costly mistake with the chair of the UK’s Climate Change Committee Lord Deben calling the decision “absolutely indefensible”.

Greenpeace UK said that it put the UK at risk of becoming “a superpower in climate hypocrisy rather than climate leadership.”

“It’s clear that the UK government has cynically delayed the decision on the new coal mine until the end of the UK’s COP presidency, which finished just a fortnight ago,” says Molly Scott Cato, former Green MEP and Professor of Economics at the University of Roehampton.

“COP President Alok Sharma was right to warn that the UK’s ‘hard-won international reputation’ over the climate emergency would be undermined by a decision to allow investment in further damaging coal extraction.”

What will coal from the UK's new mine be used for?

Though the government argues the UK steel industry will use the coal, this directly contradicts the industry’s plans to move towards green production methods, Scott Cato says.

Two companies that still make steel using the fuel in the UK, British Steel and Tata, already plan to move to lower carbon methods. Industry leaders in the country have said investment in green technology is needed - not more mines.

It’s clear that these are very high in sulphur and are not wanted by either of the two UK iron and steel makers.

“We have studied the Cumbria coals and it’s clear that these are very high in sulphur and are not wanted by either of the two UK iron and steel makers,” explains Professor Stuart Haszeldine from the School of GeoSciences at the University of Edinburgh.

Scott Cato says that just 15 per cent of the coal produced at Whitehaven would be used in the UK with the rest exported, “further encouraging other countries to expand their use of the most polluting form of energy.”

Where is the coal likely to be exported?

A majority is expected to be exported to Europe.

But the EU is set to introduce penalties for steel produced using coal that is imported into the bloc as part of its carbon border adjustment mechanisms. This penalises high carbon methods and instead favours lower carbon products like steel made using renewable energy inside the EU.

All of Europe’s major steel companies are transitioning away from polluting fuels with a goal to decarbonise by 2050. Many aim to do so before then.

“Steel making in Europe is rapidly changing to use hydrogen, not coal. Most, and maybe all, of this coking coal will be exported outside of Europe to escape environmental constraints on its use,” Professor Haszeldine adds.