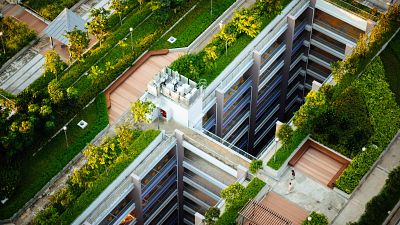 Basel, Switzerland has become the first city in the world to make green spaces a legal requirement on new buildings.

As inner-city living becomes ingrained in much of our social and work lives many of us are missing out on access to green space.

With burgeoning evidence to suggest that greener cities make for healthier cities, it is vital that city planners make space for biodiversity.

With this in mind, Basel, a major city in west Switzerland, has come up with an ingenious way of adding some much-needed greenery to urban areas. Utilising their once empty flat-roof space, Basel’s city planning authority have made green roofs compulsory. This new requirement adds patches of green space which defuse humidity and help to cool buildings off quicker during the summer months.

As part of Basel’s biodiversity strategy, for the past 15 years, green spaces have been mandatory on all new and retrofitted buildings with flat roofs. Now that this has been made compulsory, more than 1 million square metres of green roofs have been constructed, making it the leading city in ‘greening’ its urban spaces.

Researcher at the Institute for the Environment and Natural Resources in Zurich Dr Stephan Brenneisen has been advising Swiss developers and contractors for years to achieve green innovation.

Setting out to fix issues of energy wastage and increasing temperatures due to climate change, Brenneisen wanted to utilise forgotten spaces in the city to create sustainable solutions.

"Here in Basel, we noticed that (flat roofs) were not being used enough and (could be) valuable areas for nature,” he explains.

“That's why we started, together with our colleagues from the building department, and in particular, the then Director Barbara Schneider, to integrate these areas into the planning law, to define guidelines and thus to implement these projects in Basel."

By enshrining green space into construction law, Brenneisen and his team ensured that this would be an everlasting change to Basel’s architecture.

What are the benefits of adding green spaces to our cities?

Inner-city green spaces have a myriad of benefits, for climate change, but also vastly improving mental health and physical health.

According to research published earlier this year by the University of East Anglia, access to green spaces can reduce your risk of type II diabetes, cardiovascular disease, premature death, preterm birth, stress and high blood pressure. This has significant consequences for global health as more than one of these illnesses can be found on the World Health Organisation’s top 10 causes of death.

Additionally, green spaces have great benefits when tackling issues of smog and pollution. Scientists consistently praise the role of green walls and roof gardens in helping to mitigate the effects of harmful inner-city emissions.

When considering the future of climate change and increasing temperatures, Basel is ahead of the curve in using rooftop gardens to reduce humidity. During Canada's recent record high temperatures, resulting in the deaths of hundreds, humidity played a significant factor in endangering lives.

By creating humidity regulators, in the form of urban greenery, we can help keep temperatures down, and ultimately, save lives in the long run.