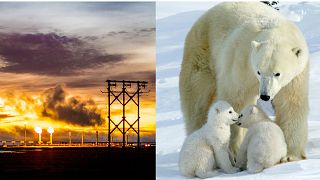 All unleased state-owned land and sea on the Arctic North slope will be up for grabs covering roughly 3.24 million hectares in total.   -   Copyright  canva
By Charlotte Elton  •  Updated: 21/10/2022

The US state of Alaska is auctioning off a Netherlands-sized area of arctic territory to oil and gas producers.

All unleased state-owned land and sea on the Arctic North slope will be up for grabs covering roughly 3.24 million hectares in total.

The available leases include 364,000 hectares in Alaska’s Beaufort Sea.

If the land is successfully auctioned, it will lead to an expansion of oil and gas production in the Arctic.

769,000 hectares of Arctic North Slope land and sea is already under lease by fossil fuel companies. Alaska’s state-wide lease takes place every year, though this is the largest yet.

Why is Alaska leasing land for oil and gas production?

Oil drilling in Alaska has been a hot topic in the US for several years.

The oil industry is a huge source of revenue for the state. The Arctic Alaska province produces about 1.5 million barrels of oil per day and accounts for nearly 25 percent of all current US daily oil production.

But the land up for auction this month - until 3 November - is owned by the state of Alaska, not the US federal government.

“While we’re frustrated that the federal government is limiting exploration on federal lands in Alaska, the State is committed to making millions of prospective acres in Alaska available for lease.”

The government’s press release announcing the sale makes no mention of the environment.

What do environmentalists think of oil drilling in Alaska?

In August, Environmental NGO Earthjustice filed a lawsuit challenging the federal Bureau of Land Management’s (BLM) approval of Peregrine, an exploratory drilling program in the Western Arctic in Alaska.

“According to EPA’s greenhouse gas emissions calculator, extracting and burning the quantity of oil that could be found at the Peregrine site would be the carbon equivalent of emissions from 173 coal-fired power plants operating for a year,” EarthJustice said in a statement.

Greenpeace USA said that “science and justice” precluded any new oil drilling in the delicate region.