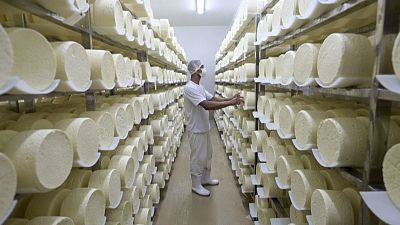 That put unsung Brazil, a country not widely known for its cheese, second only to France on the podium of the world's best.

Alagoa is the name of the region responsible for many of this award winning Brazilian cheese.

Is Alagoa cheese capital of Brazil?

The bucolic region is situated in the longtime 'queijo' (cheese) producing state of Minas Gerais.

Settled three centuries ago by colonists digging for gold, the area started producing cheese when an Italian shoemaker, Paschoal Poppa, arrived in the village in the early 20th century with a recipe for parmesan.

Today, the municipality of 2,700 people is home to no less than 135 cheese-makers, several of whom have won prizes at recent editions of the festival in Tours.

That is generating a nascent gastronomy tourism industry in Alagoa, whose sleepy streets are now decorated with mini-Eiffel Towers at cheese shops, celebrating the town's newfound status as a foodie destination.

Life as a cheese farmer

The prizes "have changed our lives," says Dirce Martins, who has been making cheese in Alagoa for 39 years.

"Nobody used to come here. Buyers basically paid whatever price they wanted for our cheese. Now we have all these visitors," she says, giving a tour of the small room where she ages her multi-award-winning 'Fumace' on wooden shelves.

Working alongside her husband and son, Martins produces at most 60 smoked cheeses a day.

Cassia, 32, has a similarly small operation: she and her husband, Marcos, make around 15 kilograms (33 pounds) of cheese a day with their 15 dairy cows, who sport names like France, Spain and Denmark.

"And the competition is tough," she adds, as she shows how she and her husband artificially inseminate the cows themselves.

She and her husband credit the silver medal they won in France with luring the big-city suppliers who now brave the rocky valley road to their farm to buy their cheeses at 45 reais (€7) a piece.

How do cheese farmers in Alagoa benefit from success at the 'Mundial du Frumage'?

"For a French cheese, winning a prize boosts its value by up to 20 per cent. In Brazil, the increase is 300 to 400 per cent," says Carvalho, the director of SerTaoBras, an association that promotes Brazilian craft cheeses.

The company won a 'super gold' in France with its 'Santo Casamenteiro' a blue cheese with apricots and nuts that looks like a wedding cake.

Cruzilia, which has a line of more than 90 products, has increased production by a third three years.

"Brazilians are starting to look within our own borders and value our flavors and traditions," says Juliana Jensen, research director for Cruzilia.

Check out the video above to see where and how the cheese is produced.

Gruyere refers to style not location says US trademark ruling