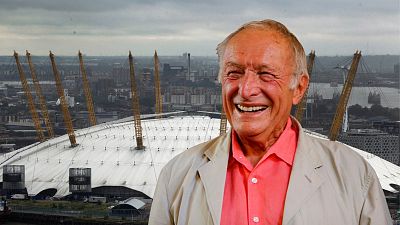 Richard Rogers: A designer responsible for some of Europe's most impressive modernist spaces   -   Copyright  AP
By Shannon McDonagh  with AP  •  Updated: 20/12/2021

Richard Rogers, the British architect who helped change the look of modern cities by putting features like elevators and air ducts on the outside of his buildings, has died at 88.

The pioneering modernist revitalised much of Europe's urban landscapes, arguing that parks and public spaces should be developed alongside office buildings, and that mass transit should replace private cars.

In a career that lasted almost 60 years, Rogers won his profession's highest honour, the Pritzker Architecture Prize, in 2007 and France's Legion d'Honneur in 1986. He was also a member of Britain's House of Lords.

"Cities are a stage where people perform and buildings are the sets that frame the performance," he said. "A place for all."

Following news of his death, we ask – what cities in Europe is Rogers' legacy felt most thoroughly?

Here are some of his most pivotal designs you might recognise across the continent.

Rogers burst into public view in 1972 when work began on the Pompidou Centre in Paris - a futuristic block of scaffolding-like metal pipes and glass walls that he designed with another young architect, Renzo Piano.

Their joint proposal was chosen out of 681 submissions from around the world.

An "inside-out" structure and bizarre colour-coded exterior represented a much needed shake-up in the way we view buildings and their functionality.

Pompidou was shaped around a vision wherein Parisians could access a hub of cultural enrichment in the form of exhibitions, cinema, music, among others, reinstating the city's status as a catch-all for entertainment and communication.

Fellow British trailblazer Norman Foster described Rogers' designs as a mirror for his "gregarious, outgoing, generous and possessed an infectious zest for life."

Ever the fan of sleek structures, Foster's influence on his friend can be felt in the likes of the Millenium Dome – later rebranded as London's O2 Arena.

Costing over €1 billion in today's currency, the seemingly simple marquee design nestled on the docks of East London is actually the eighth largest building in the world by useable volume.

The Dome was built to mark the turn of the century for the city but attracted scrutiny over its unclear longstanding purpose and costs.

Reshaping the venue into one of today's most popular musical attractions came soon afterwards, putting those fears to rest.

Terminal 4 of Madrid's Barajas Airport marked a full-throttle embrace of the natural world.

Rogers credited his parents, a doctor and an artist, as well as his cousin, post-war Italian architect Ernesto Rogers, with driving this.

"They instilled me with a clear understanding of how, if we build well, we can create a socially inclusive environment," he once told the Yale Center for Dyslexia & Creativity. "This has helped to drive my work."

Graced with soothing marbles, a curved bamboo ceiling, and huge glass planes for natural light, Rogers and his team knuckled down hard on making one of Europe's busiest airports – 8 million square feet in size, no less – a less stressful experience for the 70 million extra passengers it brings in every year.

A post shared by The Leadenhall Building London (@cheesegraterldn)

Once an adviser to the mayor of London on architecture and urban strategies, Rogers was able to grace the capital once more in 2014, aged 80, with the Leadenhall Building.

Better known to some as 'The Cheesegrater' for its unique shape, this embrace of sheer steel power stands at 42 floors tall and over 800 feet.

Rogers and his team opted for the unconventional shape – designed with a 'diminishing depth' – to protect the view of the capital's St. Paul's Cathedral, which has stood in the city for over 1,400 years.

In 2018, it won both the Royal Institute of British Architects' (RIBA) National and London awards, cementing its place amongst Gherkins, Walkie-talkies, and the Lloyds Building – another Rogers original.

Inspired by Flemish paintings of barges passing along countryside canals, this project sought to address the problem of creating a new 'gateway for the city', unaffected by Antwerps imposing motorways on its urban south.

Designed in conjunction with Belgian architects VK Studio, the building's landscape was cleverly designed to shield the courtrooms away from the sound pollution of these roads, drawing visitors away from the chaos.

This exercise in statement-making saw the development of spiked, shard-like roofing defy all conventions that we expect legal spaces to look like.

One of many award-winning endeavours from a late great.