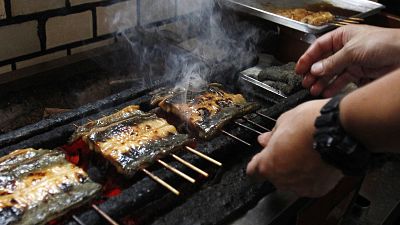 Prices of the beloved Japanese delicacy have surged due to overfishing, pollution and changes to ocean currents   -   Copyright  AP Photo
By Theo Farrant  & AFP  •  Updated: 21/12/2021

Tsuyoshi Hachisuka gently places skewered eel on a grill, preparing a much-loved Japanese delicacy that is now so endangered it commands eyewatering prices and the attention of international traffickers.

Consumed worldwide, eel is particularly popular in Asia - and perhaps nowhere more so than Japan, where remains found in tombs show it has been eaten for thousands of years.

Despite its enduring popularity, much about the eel remains a mystery. Precisely how it reproduces is unclear, and coaxing it to do so in captivity without intervention has proved unsuccessful so far.

A dish of unaju (eel on rice) is today nearly three times more expensive than when I started.

While the writhing snake-like creature is repellent to some, it is a mainstay of Japanese cuisine. Since the 17th century it has most often been prepared 'kabayaki'-style: skewered, grilled and basted in a mixture of soy sauce and mirin rice wine.

However, the annual catch in Japan of glass eels has fallen to 10 per cent of 1960 levels. That has driven prices sky-high, even in a country that has battled for years to achieve inflation.

"A dish of unaju (eel on rice) is today nearly three times more expensive than when I started," said Hachisuka.

There are 19 species and subspecies of eel, many of them now threatened.

In 2014, the Japanese eel was listed as endangered by the International Union for Conservation of Nature, which cited factors including habitat loss, overfishing, pollution and migration barriers.

Where do Japanese eels come from?

Protecting the animal is complicated by their mysterious life cycle, which unfolds over a vast geographical area, and the many unknowns about how they reproduce.

Eel reproduction has fascinated scientists for thousands of years, with even Ancient Greek philosopher and naturalist Aristotle puzzling over it.

He theorised eels must simply emerge spontaneously in mud because he could find no traces of their larvae.

"We think that the eel emerged approximately 60 million years ago, near the island of Borneo," explains Mari Kuroki, assistant professor at Tokyo University's aquatic biosciences department.

"As continental drift affected marine currents and the distance grew between the areas where eels lived and laid eggs, the creature has adapted," she told AFP.

It is now present in every ocean except the Antarctic.

But despite their ubiquity, it wasn't until the early 20th century that European scientists discovered that European and American eels are born somewhere in the Sargasso Sea near Cuba. Their larvae are then carried by currents to different regions.

The precise location of eel spawning sites remained an enigma until 2009, when a scientific mission pinpointed the breeding grounds of the Japanese eel. West of the Mariana Islands, some 2,000-3,000 kilometres from Japan's coasts.

Evidence suggests the species mates and lays its eggs at the spot, but the process has still never been observed.

Once they hatch into larvae, the creatures drift towards coastlines, growing on the way into glass eels.

Why has the Japanese eel become an endangered species?

Eels are vulnerable to a wide range of catastrophic human behaviours, and climate change-linked phenomenon like El Nino have affected the ocean currents that carry them, as well as their spawning sites.

The deterioration of their freshwater habitats, including by river development, also plays a significant role, along with pollution.

Dams can block migratory routes and eels are sometimes caught in hydroelectric turbines, a leading cause of death for the species.

An uncertain future for the Japanese eel

With stocks falling and prices rising, eel consumption in Japan has changed. The dish is now seen as a treat rather than a regular meal.

The Japanese eel is so precious it is sometimes dubbed 'white gold', with prices fluctuating wildly depending on the catch size.

A record 160,000 tons was consumed across the country in 2000, but that figure has fallen by two-thirds.

In 2010, experts bred two consecutive generations of Japanese eels in a lab for the first time, a major advance.

But these "artificial" eels aren't likely to hit the market anytime soon, says Ryusuke Sudo of the Japan Fisheries Research and Education Agency in the Izu region, southwest of Tokyo.

"The biggest problem now is that the method is very expensive," he told AFP.

Each eel requires individual human intervention, the reproduction rate is low, and creatures produced in captivity also grow slower than their wild counterparts, he said.

Researcher Kuroki believes the best way to protect the species is to make consumers more mindful.

"We need to appreciate each eel we eat," she said, "keeping in mind that this is a precious natural resource."

Check out the video above to see the full report