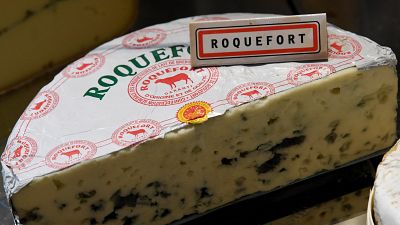 Roquefort, the famous French blue cheese made from sheep's milk in southern France, is at the centre of a row over the country's Nutri-Score classification.

Cheesemakers, far from feeling blessed, have complained that they are being punished by their rating and have demanded an exemption in the name of tradition and respect for gastronomic heritage.

The Nutri-Score, an optional labeling system, set up by the French government in 2016, is based on five letters (A, B, C, D, E) and a color code, from green to red, according to the nutritional quality of each foodstuff.

The Nutri-Score of 90% of cheeses, including Roquefort, is D and E - the least nutritious.

"It's paradoxical. Ultra-processed industrial products with preservatives can have A or B, while our very natural local products are stigmatised", points out Sébastien Vignette, secretary general of the General Confederation of Roquefort.

"The public authorities plan to make the Nutri-Score compulsory from 2022, which is why we are mobilising. We feel it is unjust, we are the heirs of ancestral recipes, with a guarantee specification: quality,” explains Vignette.

The confederation's big cheese sees the use of a Nutri-Score label as "simplistic".

"We are living in a strange time where complexity and nuance rarely have a place," he says.

The best is the enemy of the good

Stéphane Mazars, the LREM deputy from Aveyron, where the cheese is made, makes the case for a consumer value judgement being ultimately misleading.

"Between A and E, if I don't know, I naturally go to A. For Roquefort, it doesn't make sense. The specifications are already an act of responsibility towards the consumer. The desire for transparency due to the consumer must be rational and common sensical." he said.

"The best has become the enemy of the good," the parliamentarian added, paraphrasing Voltaire.

This is not an isolated protest, either. The discontent expressed in Aveyron is shared by many cheese producers in France.

Vignette points out that there is no "problem of overconsumption of cheese in France" and that the French public health authority should not blacklist "Roquefort and other PDO quality cheeses".

"We are not in a fight against Nutri-Score, he insists, if it is reserved for pre-processed industrial products. It is commendable to inform the citizen. What we are fighting is the system's application to PDO products."

Widely acclaimed by distributors and manufacturers, in a context of growing consumer demand for information, the Nutri-Score has also been adopted in Belgium, Spain and Germany, and it is recommended by the WHO (World Health Organization).