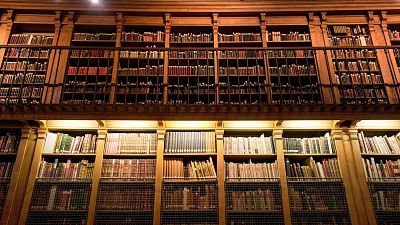 The French government are in the process of signing off on a policy that will protect some 16,500 public libraries.

Over 12 million people use these treasured reading spaces across the country, which are considered cultural institutions by literature lovers.

The legislation, initiated by Socialist Senator Sylvie Robert, includes the main principles that govern municipal and inter-municipal libraries: freedom and free access, neutrality of public service and pluralism of collections.

"Their missions are to guarantee equal access for all to culture, information, education, research, knowledge and leisure as well as to promote the development of reading," says Robert.

French MEPs are enthusiastic about the potential for libraries to preserve linguistic heritage and regional languages, reduce illiteracy (which is at 7% amongst the French population), and close the digital-skills gap.

The new law also states that the collections of public libraries must be free from all forms of ideological, political or religious censorship or commercial pressure.

Libraries have a social vocation

The proposed bill was adopted unanimously at second reading and greeted with rejoicing from Senator Robert.

She hopes the law will come into effect as soon as possible.

Libraries "are no longer just a place of knowledge and study, they have a social vocation," underlined Senator Elsa Schalck.

Other senators noted that it was gratifying to see the health of libraries in a digital age, and the role libraries play in education.

"Culture in general is a bulwark against all the delusions that some people distill in our country," said David Assouline.

"Books have always been symbolic, the fascists first started to burn books".

Spiderman: No Way Home shown in European cinemas every half an hour