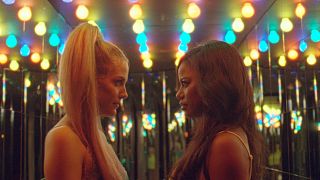 'The Novice,' a sports drama and psychological thriller from first-time filmmaker Lauren Hadaway, followed with five.

The nominations for the 37th edition of the awards were announced by Naomi Watts, Regina Hall and Beanie Feldstein via a livestream broadcast on YouTube.

What is Zola about?

'Zola' is a dark comedy based on the 2015 viral twitter thread by A’Ziah King.

It tells the story of a stripper named Zola, who embarks on a road trip-gone wrong in Tampa, Florida.

You think you know #TheStory? Watch the new trailer for ZOLA, from director Janicza Bravo, starring @TaylourPaige and based on the life and work of @_zolarmoon.

In Theaters This Summer pic.twitter.com/VD0RGNHced

The film has been lauded for its candy-hued aesthetic, authentic performances and commentary on race, sex trafficking and agency within sex work.

'Zola' was nominated for best feature alongside 'The Novice,' the Italian-language drama 'A Chiara,' 'C’mon C’mon,' about a young boy and his uncle, and Maggie Gyllenhaal’s Elena Ferrante adaptation, 'The Lost Daughter,' a meditation on motherhood and rage.

'Wild Indian,' a thriller about a long-ago murder of a classmate from another first-time filmmaker Lyle Mitchell Corbine Jr., also got four nominations.

The Film Independent 2022 #SpiritAwards Nominees are officially out! Missed the livestream? Not to worry! Check out the official announcement today #ontheblog! ✨ Read more: https://t.co/2wUOmCf6M6

It was a good morning overall for 'Zola' studio and distributor A24, whose films received a total of 13 nominations.

Meanwhile, Neon, which distributed 'A Chiara' and 'Pig,' and Netflix, which is behind 'Passing' and 'The Lost Daughter,' both got nine.

What makes these awards different from the Oscars and Golden Globes?

Founded in 1984, The Film Independent Spirit Awards celebrate independent filmmakers that used a budget of less than $22.5 million (€20 million).

After going virtual earlier this year, the show is returning to an in-person event, beachside in Santa Monica, California.