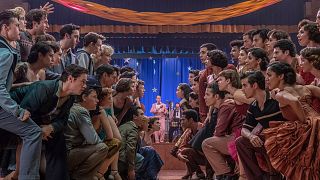 Musical fans in the much of the Middle East will no longer be able to attend screenings of the anticipated Steven Spielberg reboot of West Side Story.

Why? Because it features a transgender character named Anybodys.

The character was depicted as a female 'tomboy' in the original film and stage show and will now be played by non-binary actor Iris Menas, star of Broadway's 'Jagged Little Pill'.

As a result, six countries will no longer be showing the film.

Saudi Arabia, the United Arab Emirates, Qatar, Bahrain, Oman and Kuwait requested censorship cuts be made to their screenings, which Disney, the producers and Spielberg refused.

Productions with LGBTQ+ characters and themes have been regularly targeted by censors in the Middle East, as well as China.

It is not uncommon for these territories to ask for recuts that remove not just LGBTQ+ references, but also profanity, overtly sexual themes, and ideas that don't mesh with their religious views.

Most recently, Marvel's comic book epic 'Eternals' was pulled from release across the same region due to the inclusion of Marvel’s first openly same-sex couple.

Resisting demands made by major markets tends to have a financial impact on feature films.

'Eternals' cost €178 million to make and has made €340 million worldwide – a roaring success for some movies, but not Marvel.

What to expect from the new West Side Story

The new version arrives 60 years after the original movie, based on the 1957 Broadway show.

New leads Rachel Zegler and Ansel Elgort appear as star-crossed lovers. Their desire for one another stokes the fires of rival New York Street gangs, the Puerto Rican Sharks and the American Jets.

The casting honours its original by putting Rita Moreno (who won an Oscar for portraying Anita in the 1961 adaptation) as Valentina.

Early critical praise suggests Spielberg's new version could mimic its predecessor's success given that it took home 10 Oscars and has since been placed in the US library of Congress as a work of cultural significance.

Disney's pushback against the censorship demands of the Middle East shows they are confident the film will be a triumph regardless.

"As artists and creators, all we can do is with love, put the message out that all humans matter and everybody deserves to define themselves that bring them an alignment of identity," explains producer Kevin McCollum.

"And therefore you can connect with people and love fully and be an authentic person and a full person. If there are communities and cultures that don't understand the power of that, then that is out of my control. But the film is not going to be changed."