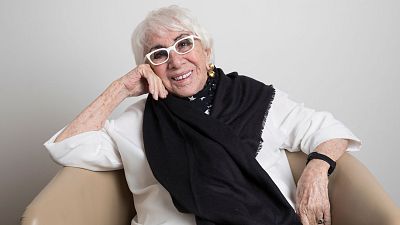 Italian director Lina Wertmüller, the first woman to receive an Oscar nomination for directing, has died, news reports and the Italian Culture Ministry confirmed on December 9. She was 93.

Wertmüller, who won a lifetime achievement Oscar in 2019, died overnight in Rome surrounded by her family, the LaPresse news agency reported, quoting her relatives.

Culture Minister Dario Franceschini paid tribute to Wertmüller, saying her “class and unmistakable style” had left its mark on Italian and world cinema.

“Grazie Lina,” he said in a statement.

Wertmüller in 1976 became the first woman to receive an Oscar nomination for directing for 'Seven Beauties,' a film for which she also was nominated for best original screenplay.

She didn’t win then, but the Academy acknowledged the milestone in awarding her a lifetime achievement four decades later.

Distinguished by her iconic white-rimmed glasses, she also directed 'The Seduction of Mimi,' 'Love and Anarchy' and 'Swept Away,' among other films.

She is survived by her daughter, Maria Zulima Job.

Festival of Lights: Crowds show up as Lyon emerges from the shadows