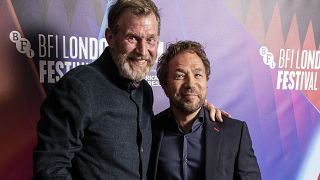 Euronews spoke to the film's producer, Bart Ruspoli, the day after the feature won the awards to find out more about the world of indie film production.

Euronews: At what point did you know this project was something you wanted to be a part of?

Bart Ruspoli: We made a short film in 2019 - again with Stephen Graham - and that was made almost as a proof of concept for the feature film version. So it was always the plan.

Euronews: Much has been made of the 'one-shot film' since Sam Mendes' 1917. Was this always the plan from writer Philip Barantini's script or was it introduced as a tension-building technique?

**Bart Ruspoli: **Whilst the short was also a one-take film we didn’t set out right away with the idea of making the feature in one shot. Phil decided that during the script development process, he felt that to really convey the frenetic atmosphere of the kitchen as effectively as we’d done in the short, then we had to be brave enough to attempt the feature in the same way.

Euronews: How did you sell it to the backers, and what do you think the dealbreaker was?

Bart Ruspoli: Our main backer financed the short as well, so he was in it from the off. Some of them did say to us though “maybe you should put some hidden cuts in there? Just to be safe?” But by then we were committed! And there was no way we were going to do that. Obviously the short, which proved we could do it, and Stephen’s involvement was enough of a security to make them trust us.

Euronews: The filming dates sailed perilously close to lockdown. How did you manage to avoid that logistical nightmare?

Bart Ruspoli: We were already attempting something extremely difficult, and then we had the added twist of an impending global pandemic! It’s a testament to the cast and crew’s professionalism and teamwork that we pulled it off. We wrapped very early Wednesday morning, and on Monday Boris put the country in lockdown. It was down to the wire.

Euronews: So you escaped the lockdown. What, then, was the biggest production challenge?

Bart Ruspoli: Everything element of the production was a challenge. From the sound to the custom camera rig we had to create to enable a live reload, and for enabling Matt Lewis our 23-year-old cinematographer to turn around and move through the pass and the kitchen. Nobody should underestimate the magnitude of what Matt achieved in only his second feature film and at such a young age. He had to memorise almost 100 separate camera moves. There are cinematographers that have been in the industry 40 years and won countless awards who would not have been able to pull that off.

Euronews: What do awards do for independent films?

Bart Ruspoli: The BIFAs are a fantastic way of showcasing independent film. And they certainly help promote films and young and new talent that otherwise wouldn’t have the platform they deserve.

Euronews: People might not realise this but you've done it all: You're also an actor, a director and a screenwriter with two producer nominations from BIFA to your name. What's your advice to independent filmmakers?

**Bart Ruspoli: **Don’t ignore the tropes of the genre your film is in - just put a human story at its heart and push those tropes to the edge of the page but not off.

**Euronews: **What is the biggest pitfall that indie film producers fall into?

**Bart Ruspoli: **Budgeting a film before scheduling it. How do you know how much it’s going to cost if you don’t know how long it’s going to take to make it?

'Boiling Point' starring Stephen Graham, Vinette Robinson, and Jason Flemyng, produced by Bart Ruspoli and Hester Ruoff, is released in the UK on 7 January 2022. It opens in France three days later on 10 January. But if you're in Spain you get to see it (entitled ‘Hierve’) from 29th Dec on VOD platform, Filmin.

If you're reading Euronews Culture from the US, you can go and see it right now.