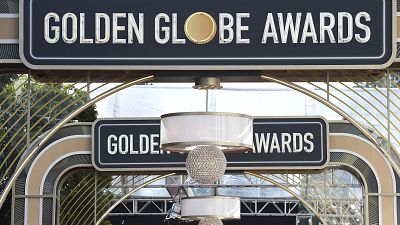 The once-treasured ceremony will take place on January 9 and may not be televised   -   Copyright  Jordan Strauss/Invision/AP
By Tim Gallagher  with AP  •  Updated: 14/12/2021

Nominees for the Golden Globes have been announced despite an explosive expose of the award show’s voting membership and alleged unethical practices.

The Hollywood Foreign Press Association (HFPA) gathered reporters at the Beverly Hilton to announce its picks for the 79th Golden Globes on Monday.

But without the usual nationally televised morning slot the ceremony received little fanfare.

The HFPA’s list was read out by Snoop Dogg during a live stream on the Globes' YouTube page, with nominations for Kristen Stewart in 'Spencer', 'West Side Story' breakthrough Rachel Zegler, Denzel Washington in 'The Tragedy of Macbeth', and Lady Gaga in 'House of Gucci'.

These Globe nominations were greeted with a less celebratory atmosphere

However, few stars were celebrating their nods from the HFPA after a year plagued by controversy.

In February this year the LA Times published a report which alleged that of 87 voters in the HFPA not one was black, and accused the show of overlooking black-led films in its picks.

The group was also hit with allegations of taking kickbacks and a culture of silence around effective-bribery. The LA Times investigation was scathing in its description of members that were lavished with gifts, party-invites, and access to celebrities in the run up to the award show which studios wished to use as a marketing tool.

Accusations were also floated regarding the HFPA giving large sums of money to members which could run afoul of the Internal Revenue Service, and their not-for-profit status.

An outcry in Hollywood greeted the piece, with 100 PR firms threatening to tell the stars they advise to boycott the organisation, meanwhile Amazon and Netflix studios said they would no longer work with the HFPA.

Actors including Mark Ruffalo and Scarlett Johansson also spoke out against the Golden Globes, with Johansson alleging she has been the subject of sexist remarks from HFPA members.

Actor Tom Cruise even returned his three Golden Globes to the group’s headquarters.

The awards – which pull in a steady audience of between 18 and 20 million every year – were also dropped by major network NBC.

Right now, the ceremony does not have a broadcast home, meaning it may not air on television.

Is a reboot of the HFPA possible?

The press association claims that in the nine months since its 2021 show, it has remade itself.

"This has been a year of change and reflection for the Hollywood Foreign Press Association," says recently elected president, Helen Hoehne.

Claiming it is now 'HFPA 2.0' Hoene pointed out that the group has added a chief diversity officer; overhauled its board; inducted 21 new members, including six Black journalists; brought in the NAACP on a five-year partnership; and updated its code of conduct.

Since the disruption to Hollywood's chain of acclaim, the Critics Choice Awards have sought to fill the void, even seeking to secure the Globes' usual home at the Beverly Hilton for its telecast.

That bid failed but the Critics Choice Awards will take place on January 9 – the same night as the Globes, leaving actors, directors, and creatives with a choice to make.