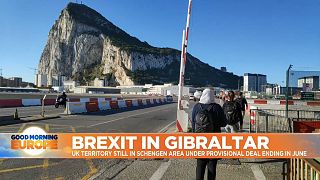 Last December, just hours before Brexit came into full force, the UK struck a deal with the European Union to keep Gibraltar in the bloc's borderless Schengen area.

That agreement, however, was provisional and now, nearly six months later, it is set to expire by the end of June.

While an extension to the agreement is likely, a delay in talks has many cross-border workers worried, with the Gibraltar Cross Border Workers Association urging action.

'Everything has been delayed'

Part of the agreement had aimed to bring down the fence separating Spain from Gibraltar.

Under the deal, Gibraltar, Spain and Frontex would be in charge of the double border control, which would be at the port and the airport.

There would also be a four-year transition period in which the British overseas territory would have to adapt to the EU customs union in order to avoid distortions in the market.

However, several months have passed and the border fence has remained standing.

And the fence's removal is not the only thing that has been delayed, with Juan José Uceda, a spokesperson for The Gibraltar Cross Border Workers Association, telling Euronews of his union's frustrations as territory waits on the EU to resume negotiations for a post-June deal.

"Everything has been delayed, Brexit included ... And now they're even telling us 'wait until June that things are going to be solved'," he said.

"They're not doing anything", he asserted.

Framework already in place for extension

The Deputy Prime Minister of Gibraltar, Joseph García, has maintained, however, that there is already a framework for the agreement to be extended.

"Once that mandate has been given then the proper negotiations can commence," he said.

However, he said that if talks do not begin soon, there could be an extension to the original end-of-June deadline.

In a statement sent to Euronews on Wednesday, Aikaterini Apostola, a spokesperson for the European Commission's Financial Stability, Financial Services and Capitals Markets Union, said a review was still underway before the "next steps" in determining Gibraltar's fate could be decided.

"On 31 December 2020, the Commission received a note of the proposed framework for a UK-EU legal instrument setting out Gibraltar’s future relationship with the EU," Apostola said.

"The relevant services in the Commission are currently examining the request in view of proposing the next steps..." the spokesperson said.

While cross-border workers wait for answers, some Gibraltar-based workers appear to be less concerned about what happens with the EU deal.

Speaking with Euronews, Ravi R. Chuhani, owner of the Gibraltar Gift Shop, said the fallout from Brexit has so far only caused minor issues for his business.

"Delivery times, I think they are longer to come over from the UK," he said.

"The paperwork is much more complicated to deal with and I believe we starting to see an increase in prices in some sectors," Chuhani said.